The 50 largest consumer goods manufacturers in the world 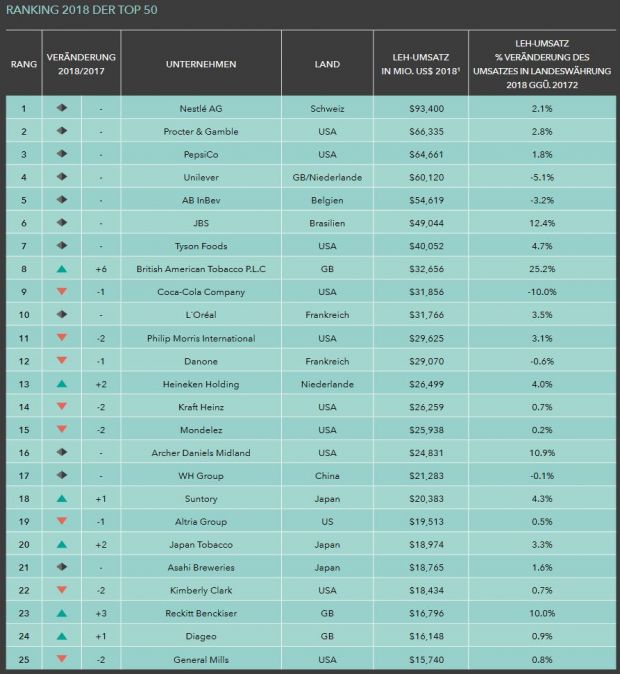 The current strength of the world's largest consumer goods manufacturers is impressively reflected in the development of organic growth, which is rising to 3.2% (+0.6 percentage points compared to the previous year).

GERMANY, Munich. Since 2002, the international management consultancy OC&C Strategy Consultants has been analysing relevant key financial figures for the consumer goods industry on an annual basis and, on this basis, has compiled a ranking of the 50 internationally most successful FMCG giants.


Nestlé is again by far the world's largest FMCG company. The Swiss-based Group's sales increased by 2.1% to $ 93.4 bn. The growth rates in the following positions are also rather moderate: Procter & Gamble in second place grew by 2.8% and achieved sales of $ 66.3 bn. in 2018. PepsiCo ($ 64.7 bn.) increased its sales volume by 1.8% and ranked third. The only newcomer in the top 10 is British American Tobacco in 8th place ($ 32.7 bn.). The London-based tobacco group achieved sales growth of a good 25%. The main driver of this development is the acquisition of the competitor Reynolds, which was completed in 2017.


The FMCG giants achieved an average return on sales of 18.2% in 2018 (+0.4 percentage points compared to the previous year). This is a record result since the first publication of the ranking in 2002.

The current strength of the world's largest consumer goods manufacturers is impressively reflected in the development of organic growth, which is rising to 3.2% (+0.6 percentage points compared to the previous year). Volume growth in particular, at an average of 1.8%, contributed significantly more than in previous years (0.6% in the previous year).