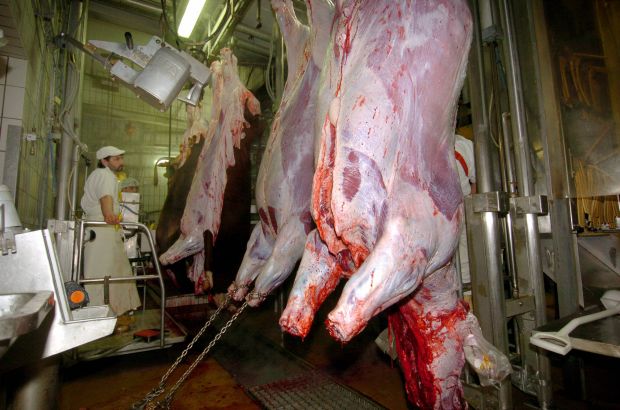 The study revealed the benefits of implementing a re-grading system for dark cutting carcases.

AUSTRALIA, Northern Sydney. One of the key findings of a recently completed study which evaluated the effect of production, climate, animal, lairage and processing factors on dark cutting in 142,228 grainfed carcases over a one-year period was that increasing the time between slaughter and carcase grading to more than 20 hours can reduce the incidence of dark cutting and boost MSA compliance in Australian feedlot cattle.

University of New England’s Dr Peter McGilchrist said the study showed that while there are many factors that can’t be controlled, such as the weather, or sex of an animal, there are key areas that the industry can manage together to reduce the incidence and impacts of high pH and dark cutting: “Results from the slaughter chain analysis suggest minimizing time in lairage and maximizing time between slaughter and grading are the two major ways to reduce Meat Standards Australia (MSA) pH non-compliance and high meat colour.“

He further explained: “Minimizing time in lairage reduces the exposure time to stressors and reduces their ability to cause glycogen depletion. Maximizing time from slaughter to grading to at least 20 hours will minimise the amount of false positive pH non-compliance and reduce the incidence of high colour scores.”

University of Melbourne’s Professor Robyn Warner said another part of the study, which examined time to grading and re-grading impacts, revealed the benefits of implementing a re-grading system for dark cutting carcases: “The results suggest that when carcases are graded at 9–16 hours post-slaughter, meat colour and pH may not have reached their ultimate value and that re-grading or delaying the grading helps to reduce muscle ultimate pH and to improve meat colour, reducing the incidences of non-compliance.“

“We suggest that processors look to standardize grading time to more than 20 hours post-slaughter. Where delaying grading to more than 20 hours post-slaughter is not possible, any carcases with high pH should be re-graded. When grading occurs early, the net economic benefit of re-grading 12 hours later and re-measuring pH, including labour costs, was calculated to be $5,129 over 1,000 beef carcases,” he commented on the results.

Warner explained the study also found that when the colour at grading was objectively measured using a NIX colour machine, significant variation was found between meat graders when assessing meat colour scores. This result highlights the potential benefits of moving to instrumental grading.

Other impacts should be factored in

Besides lairage time and processing factors, the study found a range of other factors impacted pH and dark cutting. “The effects of weather in the week prior to exiting the feedlot had an impact on the incidence of dark cutting; however, the effect was much smaller compared with other carcase, producer and processor factors,” McGilchrist said.

He further elaborated the small effect seen from weather factors on the incidence of dark cutting in cattle suggest that management and infrastructure already in place at the feedlot is likely mitigating any serious impacts from climate exposure to grainfed cattle.

There were a number of production factors identified which caused a marked increase in dark cutting including sex (females), cattle which had been pulled from pens for health treatments, and those with longer days on feed.

Other findings from the study show a strong correlation between yellow fat colour and an increase in the odds of carcases failing on pH. Carcase characteristics that saw a reduction in dark cutting included heavier carcases with whiter fat, larger hump heights, more rib fat, higher marble scores and lower ossification.

McGilchrist said the project ultimately showed the benefit of getting stakeholders in the supply chain to work together: “No one wants dark cutters – it’s a lose-lose situation for lot feeders and processors. By developing a greater understanding of the factors increasing the risk of dark cutting, the industry can work together, communicate and development effective management strategies to reduce the incidence of dark cutting in the feedlot cattle.”