From Editor fleischwirtschaft.com
Wednesday, May 29, 2019 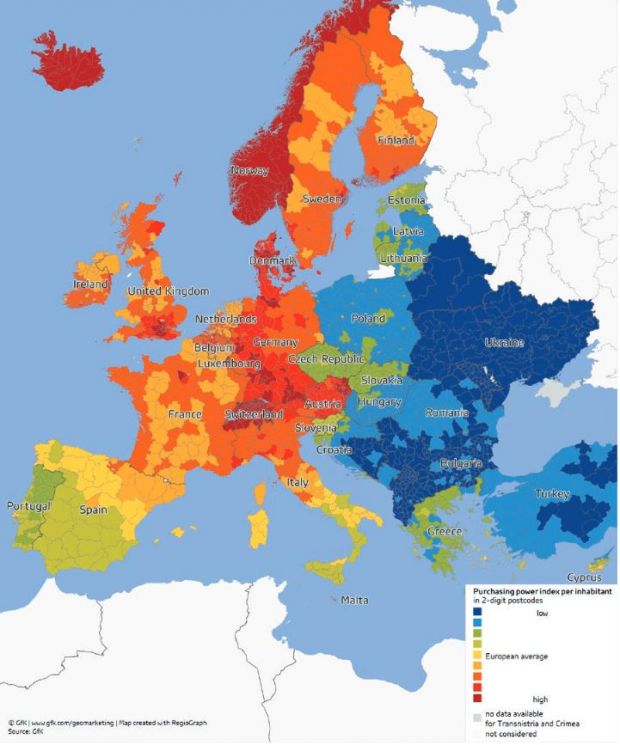 GERMANY, NUREMBERG. The study offers a detailed assessment of the technical consumer goods segment and revealshow "click-and-mortar" retailers are catching up with online-only retailers in Europe. From a pan-European perspective, the study also discusses key retail benchmarks such as retail turnover, sales area provision and the distribution of purchasing power.


For more than 30 years, the key goal of the European Union’s cohesion policy has been the dismantling of regional and international economic disparities among the member states. The EU is closer than ever to achieving this goal with respect to per capita purchasing power, at least at the national level.

The ten EU nations with the highest per capita purchasing power gains this past year all have below-average purchasing power and were admitted into the EU as part of or after the eastward enlargement. Increasingly tight job markets in these nations have led to sizeable pay increases. For example, citizens of the growth forerunners Latvia and the Czech Republic have €8,030 (+10.3%) and €9,492 (+9.3%) at their annual disposal, respectively. This moves them closer to the European average of €16,878 (+3.0%), although continued progression in that direction is likely to require the ongoing support of the European Union.

The majority of European con-sumers are currently subjected to opposing forces. On the one hand, this consists of uncertainty over Brexit, trade conflicts and weaker growth prospects in important export markets such as China. But on the other hand, consumers have a more robust labor market, higher wage increases and mod-erate prices for crude oil. This means that the purchasing power gains in real terms enjoyed by citizens in the majority of EU countries tend to go toward savings rather than retail purchases given the dampened consumer climate.

In light of the continued dynamic growth in online retail, GfK anticipates nominal turnover growth of +2% for the EU-27 nations, a figure that is only slightly above the rate of inflation. By contrast, they expect positive growth for Spain: At the beginning of 2019, the minimum wage was increased by +22%, which will directly and indi-rectly benefit 2.5 mill. people according to the Spanish government. With this in mind, the experts predict nominal turnover growth of +2.4% for the Iberian nation. Given the expected inflation rate of +1.2%, this should equate to a turnover increase in real terms for brick-and-mortar retail.

France also experienced a meaningful development at the beginning of the year. The tax system was finally changed from an annual collection for the expired calendar year to a monthly deduction at source taken from income. This could negatively affect consumer mood. But due to a fiscal stimulus effect coming into play in 2019, GfK expects that turnover in brick-and-mortar retail will increase by +2.8% despite the growing savings trend. Particularly in the Scandinavian countries as well as in Austria, Germany and Switzerland, brick-and- mortar retail has declined in relative importance in recent years with respect to overall consumer expenditures.

Prices in the EU continue to develop moderately. While the inflation rate of 1.9% in 2018 is the highest since 2012, it is still just below the 2% goal considered ideal for the economy.