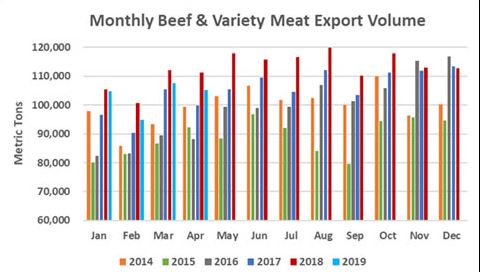 USA, Washington. April exports of US beef and pork were lower than a year ago, according to data released by USDA and compiled by USMEF.

In Japan, where all of US beef’s major competitors have gained tariff relief in 2019, April exports were down 6% from a year ago in both volume (24,149 t) and value ($156.8 mill.). Export volume through April was steady with last year’s pace at 98,296 t while value increased 2% to $637.2 mill. US market share in Japan is still more than 41%, but this is down from nearly 45% in the first four months of 2017. For chilled beef, US share has slipped two percentage points to 47.4%. In April, Japan’s imports from Mexico more than tripled year-over-year and imports also increased from Canada (up 52%), New Zealand (up 41%) and Australia (up 9%) as competitors of US beef benefited from lower tariff rates.

US pork also faces a significant disadvantage in China, where retaliatory duties remain in effect and competitors are positioning to fill China’s looming African swine fever-driven pork shortfall. January-April exports to China/Hong Kong were 16% below last year’s pace in volume (128,200 t) and down 32% in value ($242 mill.).

Leading value market Japan has not imposed any new tariffs on US pork but its main competitors (European, Canadian and Mexican pork) have gained tariff relief in 2019. January-April exports of US pork to Japan were down 7% from a year ago in volume (123,166 t) and fell 9% in value ($493.3 mill.), as US share of Japan’s total imports fell from 36% last year to 32%. The sharpest decline was in Japan’s imports of US ground seasoned pork, which were down nearly $40 mill.