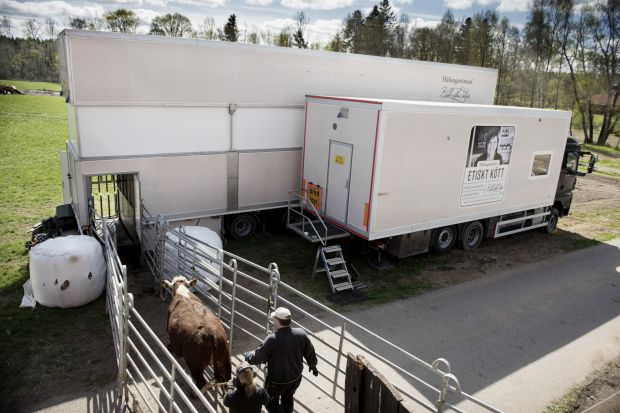 SWEDEN, Järvsö. Rising demand for ethical and traceable protein made the Swedish company Hälsingestintan roll out its mobile slaughter unit in France, introducing a new way in meat product ion.


The company has entered into a long-term partnership with France’s SAS Boeuf Ethique to introduce its mobile abattoir concept in France during 2017. The ethical concept for meat production marks the next step in Sweden’s advanced animal care model, with France becoming the first country outside Sweden to adopt the concept.

Hälsingestintan’s mobile abattoir, launched in Sweden in December 2014, comprises two carriages containing an office, changing rooms, stun platform, slaughterhouse and a cold storage unit. Instead of transporting cows to an abattoir, the device brings the mobile slaughtering unit to the farm. This avoids transportation-inflicted stress on livestock and improves animal welfare as cattle are slaughtered in their home environment, according to Britt-Marie Stegs, CEO of Hälsingestintan.

The mobile abattoir was purpose-built in Finland and, whilst a micro unit, it has all the bells and whistles needed to slaughter hundreds of animals per month. It has an on-site water purification system, sustainable power sources and separate disposal units for skin and waste.

A state-appointed veterinary is also present at each slaughtering to ensure government-set standards are met. Crucially, it has a digital traceability chain to provide consumers and buyers with all the information about the animal and its farm.

Hälsingestintan hopes that the initiative in France would open the gateways for more European companies to adopt the mobile slaughter system and move to a more transparent production system. However, the key to the long-term success of the new system will depend on profitability.