Sheep trade to remain under pressure into 201...

Sheep trade to remain under pressure into 2015 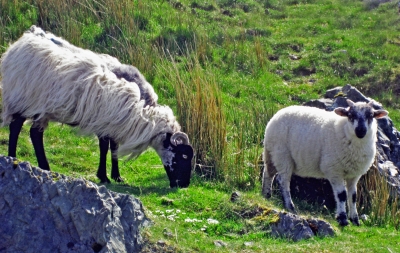 The liveweight sheep market is likely to remain under pressure into the new year due to a combination of subdued demand, plentiful supply and increased numbers of out-of-spec animals being marketed, according to EBLEX.

While Defra statistics show that the kill level was only 1% higher in August this year than last, average carcase weights are up 2% while lamb numbers for September are estimated to be up 3% compared to the same month last year.

EBLEX sector director Nick Allen believes supplies will be plentiful through to the new year.

“There is always a seasonal drop in price as we hit peak supply levels for the market for sheep meat in October, but there are a number of factors at play which mean, this year, numbers are higher and they are coming onto the market sooner,” he said.

According to Allen supply outstrips demand at the moment, as well in the UK as on the export markets. France, the UK’s most important export market for sheep meat are struggling with a poor economic situation.

“Estimates indicate lamb numbers have been over 3% higher this September compared to last. These increased numbers have likely been compounded by increased carcase weights, which also suggests more are being slaughtered out of spec. This pulls down the average price – though it should be noted that good values can still be obtained by those marketing in-spec.”

Year on year, average weights are up 0.4kg to 19.1kg. This can be put down generally to better food availability and good weather, which has allowed farmers to easily add weight to their stock.

While there has been much talk of the availability of imported product from New Zealand, levels were around 5% down in August, while prices are up 14% compared to a year ago. This means it is unlikely to be having a significant negative influence on the British market.

“We do think there are still a lot of lambs out there that have not come forward, so the plentiful supply situation could carry through into next year,” added Nick.

EBLEX has recently launched a significant lamb marketing push on the home market, including television advertising, online and social media campaigns to lift demand for lamb. It is also continuing its on-going work to stimulate demand in important export markets, with a key focus on France, where promotion of the Agneau St George brand is helping differentiate English product to consumers.

In addition, EBLEX has been involved in a successful bid to get European funding to help bolster generic lamb promotions, which will come online next year in conjunction with a number of other European countries.
Source: EBLEX