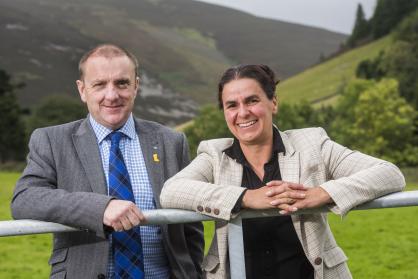 
Rowell, who has been a member of the QMS board since April 2015, will take over the role on 1 October when current chair Jim McLaren steps down after almost eight years at the helm.

A qualified vet, Rowell worked in a mixed practice in the North of England for eight years before she returned home to take over the reins of the family business, a 750 hectare farm.

Rowell is an Honorary President of Peebles Agricultural Society and took part in the Scottish Enterprise Rural Leadership Programme in 2015/16, attending the 2018 Oxford Farming Conference as an Emerging Leader.

She is also actively involved in supporting the work of the Royal Highland Education Trust which aims to encourage children to have a better understanding of farming and where their food comes from.

Rowell said she was delighted and very much looking forward to taking up the role of chair at the start of next month. During the coming weeks she will be spending time working closely with current chairman Jim McLaren to ensure a smooth handover and transition. “I feel privileged to have this opportunity to play such a pivotal role in the Scottish red meat industry. I am very much looking forward to getting out and about in the coming weeks and months to hear more from people working in all parts of the red meat industry,” said Mrs Rowell.