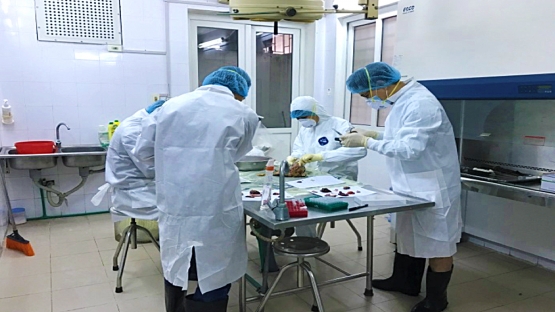 Before the training last year, NCVD had to send suspected ASF samples to reference laboratories abroad for confirmation.

AUSTRIA, Vienna. The pork industry in Vietnam has escaped the recent wave of ASF and other animal diseases hitting Southeast Asia thanks to quick action by researchers at the National Centre for Veterinary Diagnosis (NCVD).


The research team has been using training and equipment obtained through IAEA support, in collaboration with the Food and Agriculture Organization of the United Nations (FAO), to rapidly diagnose diseases like ASF with nuclear-derived and other techniques, controlling their spread and protecting the country’s livestock industry and food security.

China, which shares a border with Vietnam, reported the first case of African swine fever in August 2018. The disease quickly spread to the southern part of the country and eventually to Vietnam. Since a vaccine for ASF is still unavailable, early and accurate detection of the disease was essential to allow for the implementation of strict sanitary and biosecurity measures to contain and eventually eliminate the disease.

Immediately after the news of the outbreak in China, the IAEA, in cooperation with the Food and Agriculture Organization of the United Nations (FAO), provided a training course to veterinary diagnosticians from Southeast Asia, including Vietnam, on the diagnosis of ASF and other infectious diseases. Armed with this knowledge, the Vietnamese experts were able to diagnose ASF early and put in place measures to protect the country’s pig farms.

In Vietnam, home to 30 mill. pigs most of which are raised on family farms, pork makes up roughly three quarters of total domestic meat production and consumption. Demand for pork is increasing at 6-8% per year.

Before the training last year, NCVD had to send suspected ASF samples to reference laboratories abroad for confirmation. This could take between three and four weeks – too long for timely implementation of control measures. NCVD now has the capacity to screen around half a million samples per year and help contain not only ASF but also foot-and-mouth disease, leptospirosis, rabies and goat pox, among other diseases (see Nuclear-derived techniques for detecting animal diseases).