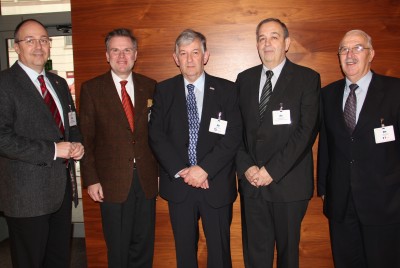 One of the main topics discussed by the delegates of the member associations of the International Butchers' Confederation (IBC) at their conference in Frankfurt am Main was the new food labelling regulations.

Secretary General Martin Fuchs reported on the national preparations for implementing the Food Information Regulation, focusing on the information on allergenic substances in loose goods and the definition of handcrafted foods.

It may not be ethically justifiable to destroy high-grade animal protein in the form of meat and bone meal and to use soya instead as feed, yet the butchery sector stands to gain little from the relaxation of the feeding ban.

The so-called horse meat scandal - in reality a case of fraud - might have resulted in increased turnover for the butchers concerned, yet it has discredited the entire sector and increased political pressure for the introduction of more comprehensive country of origin labelling, summed up the Secretary General.

Fuchs also pointed to the new EU Regulation on the Protection of Animals at the Time of Killing (Reg. 1099/2009) which came into force Europe-wide on 1 January 2013. National implementation - especially with regard to standardised instructions and proof of competence - is still in its infancy in most cases, he said.

The head of the general secretariat, Kirsten Diessner, reported on the current state of affairs, lobbying and the success of the IBC with regard to current EU legislation, especially in connection with food labelling, food hygiene, official monitoring, quality policy, additives and animal by-products. The 2014 to 2020 national rural development programmes should be complete by the end of 2013 at the latest.

In response to the horse meat scandal, Jacqueline Balzer of the French member association CFBCT demanded that butchers should not be disproportionately overburdened. It is important for businesses, authorities and consumers to engage in an ongoing dialogue, she said.
Source: afz – allgemeine fleischer zeitung 24/2013