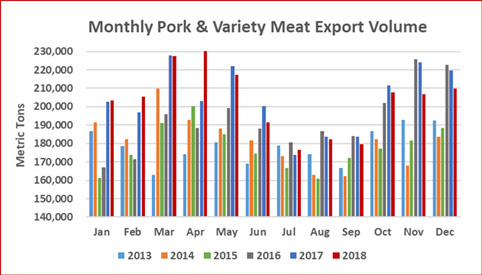 Pork export volume came up just short of the record set in 2017 while value slipped 1% year-over-year.

USA, Denver. Last year US beef exports shattered the previous value record and achieved a new high for volume, according to year-end 2018 statistics released by USDA and compiled by USMEF. Pork export volume came up just short of the record set in 2017 while value slipped 1% year-over-year.

While demand for US beef showed remarkable strength throughout the world in 2018, no market exemplified this momentum more than South Korea. Exports to Korea increased 30% year-over-year in volume to 239,676 t and jumped 43% in value to $1.75 bn. Since KORUS was implemented in 2012, the import duty rate on US beef has declined from 40 to 18.7% and will fall to zero by 2026.

Through May 2018, pork exports to leading volume market Mexico appeared to be headed for a seventh consecutive record, topping the 2017 pace by 6%. But May was the last month in which exports to Mexico would increase year-over-year, due to retaliatory duties imposed in response to US tariffs on steel and aluminum imports. The decline in value from June through December was 24%, totaling $218 mill., underscoring the large degree to which US producers and exporters bore the cost of Mexico’s 20% retaliatory duty.