Where do Americans’ Food Dollars go?

From Editor fleischwirtschaft.com
Friday, May 17, 2019 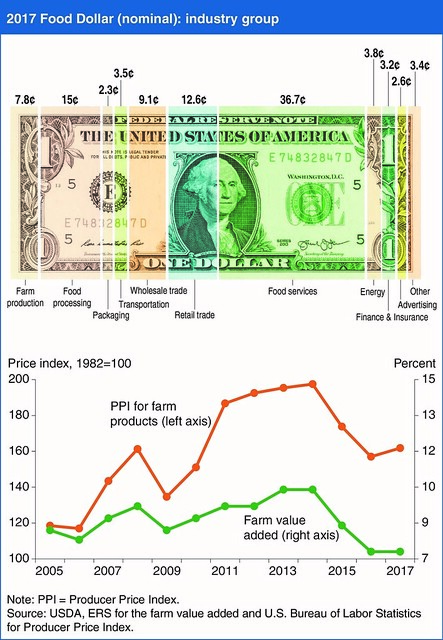 USA, Washington. In 2017, consumers in the United States spent $1.2 trillion on US-produced food. Nearly all food starts out on a farm, but did you ever wonder how the value added from processing, packaging, transporting, and marketing agricultural food products factors into the costs?


USDA’s Economic Research Service has a tool that can show you this breakdown. ERS recently updated its Food Dollar Series data product. This most recent annual update added 2017 data to the historical data going back to 1993. Aside from detailing what US total food spending pays for, the Food Dollar Series tells us what consumers pay for at grocery stores (food-at-home dollars) and restaurants (food-away-from-home dollars).

Of the $1.2 trillion in 2017 food spending, the largest cost share of the food dollar went to foodservices (restaurants) at 36.7% – this pays for others to host, prepare, and serve our meals, then clean-up afterwards. The next largest share, at 15%, went to food processors, such as bakeries, meat and dairy processors, and frozen food manufacturers. Rounding out the top five industry groups are food retailers, like grocery store chains and independent grocers (12.6%), wholesalers of both food products and production inputs (9.1%), and farm producers (7.8%). The farm producer’s share is what they receive after they pay for production inputs like seed, fertilizer, and electricity.