Pigs are immune against PRRS 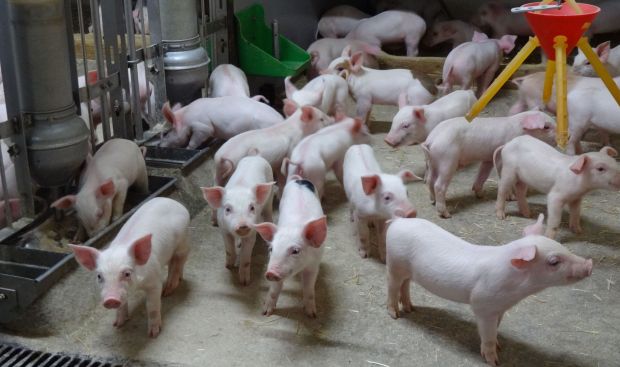 USA, Columbia, Mo. Porcine Reproductive and Respiratory Syndrome (PRRS) virus was first detected in the U.S. in 1987. Pigs that contract the disease have extreme difficulty reproducing, don’t gain weight and have a high mortality rate. To date, no vaccine has been effective, and the disease costs North American farmers more than $660 million annually. Now, a team of researchers from the University of Missouri, Kansas State University, and Genus plc have bred pigs that are not harmed by the disease.


“Once inside the pigs, PRRS needs some help to spread; it gets that help from a protein called CD163,” said Randall Prather, distinguished professor of animal sciences in the College of Agriculture, Food and Natural Resources. “We were able to breed a litter of pigs that do not produce this protein, and as a result, the virus doesn’t spread. When we exposed the pigs to PRRS, they did not get sick and continued to gain weight normally.”

For years, scientists have been trying to determine how the virus infected pigs and how to stop it. Previously, researchers believed that the virus entered pigs by being inhaled into the lungs, where it attached to a protein known as sialoadhesin on the surface of white blood cells in the lungs. However, two years ago Prather’s group showed that elimination of sialoadhesin had no effect on susceptibility to PRRS. A second protein, called CD163, was thought to “uncoat” the virus and allow it to infect the pigs. In their current study, Prather’s team worked to stop the pigs from producing CD163.

While the pigs that didn’t produce CD163 didn’t get sick, scientists also observed no other changes in their development compared to pigs that produce the protein. The early-stage results of this research are promising. The University of Missouri has signed an exclusive global licensing deal for potential future commercialization of virus resistant pigs with the Genus, plc. If the development stage is successful, the commercial partner will seek any necessary approvals and registration from governments before a wider market release.