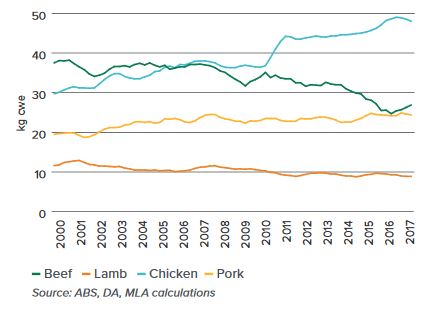 AUSTRALIA, Northern Sydney. As the world’s largest sheepmeat and goatmeat exporter, and third largest beef exporter behind Brazil and India, Australia consistently exports more than 65% of its red meat production to overseas markets.


That’s according to The Australian red meat and livestock industry State of the Industry Report 2019, launched by the Red Meat Advisory Council (RMAC). The report, compiled by Meat & Livestock Australia (MLA) on behalf of the red meat industry, provides an overview of Australia’s red meat and livestock industry, including figures on production, consumption, exports, and the economic significance of the industry.

MLA Managing Director, Jason Strong, said the report highlighted that while Australia is a relatively small producer of red meat, it plays a big role in global export markets: „Continued diversification of export destinations has allowed Australia to maximise returns and help mitigate exposure to market and trade risks. Australia exported 65% of beef, 73% of sheepmeat and 90% of goatmeat production in 2018, valued at more than $13.5 bn. This makes Australia the world’s largest red meat exporter by value.“

RMAC Chief Executive Officer, Anna Campbell, said the report is an important tool for highlighting key flashpoint areas for the attention of industry and policy makers, including market access to the European Union, the rise of alternative proteins and the impact of natural disasters.

Campbell commented the report shows that despite ongoing challenging seasonal conditions experienced by the industry, the number of red meat and livestock businesses remained relatively stable at 80,300: „The number of businesses within the red meat and livestock industry has remained relatively constant over recent years, with a growth of 4.6% between 2012-13 and 2017-18. The relatively small increase in number of businesses contrasts with larger increases in turnover of 31% and industry value add of 67%.“