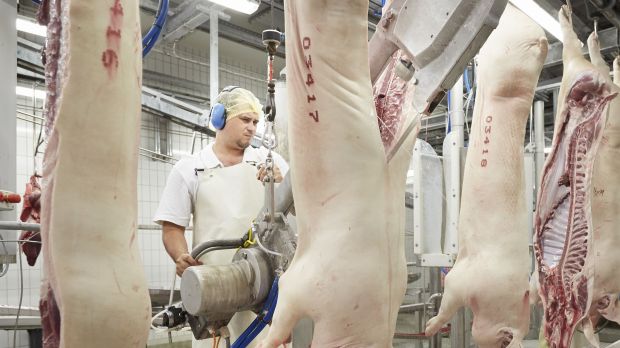 Many of the leading pig slaughter companies in Germany further consolidated their market position last year. Although the overall slaughter volume in Germany stagnated in 2016 at the previous year's level of 59.4 million carcasses, the number of pigs slaughtered by the top 10 companies rose by 2.3 per cent to 45.5 million units. This emerged from the current slaughterhouse rankings issued by the German pig farmers association (ISN).

According to this, the aggregated market share of the ten largest pig slaughterers rose by 1.8 percentage points from the 2015 figure to the new record of 76.7 per cent. More than half of all pigs in Germany, namely 55.7 per cent, were slaughtered by the three meat companies Tönnies, Vion and Westfleisch.

According to ISN, in contrast to its competitors, the industry leader Tönnies did not succeed – for the first time in the company's history – in increasing its pig slaughter numbers in Germany in 2016; at 16.2 million, the figure remained at the previous year's level.

As in the previous year Vion came second in the rankings. Slaughtering 8.87 million pigs, its figure increased for the first time again since 2013: by 1.3 per cent. The restructuring programme, which saw the closure of unprofitable locations - such as its Zeven site - continued at full speed, as the ISN reported. On the other hand, profitable sites with a Chinese licence, for example, were to be modernised. The money for further investment is to come from external investors.

Despite the fire at its Paderborn plant, Westfleisch posted record results for 2016, slaughtering 8 million pigs and processing 4.0 per cent more carcasses than in 2015. This saw its market share increase to 13.5 per cent. The company is still not revealing whether the Paderborn site will ever reopen, as the ISN reported.

One of the strongest growth rates in the slaughter sector in 2016 – an increase of 15.4 per cent to 3 million pigs – was posted by Danish Crown in Essen. This saw the company claw back lost market share, although its pricing policy was criticised more than once last year by producers.

The Baden-Württemberg based Müller group continued its growth by slaughtering 2.10 million pigs, an increase of 12.3 per cent, and by raising its market share by 0.4 percentage points to 3.5 per cent. As a result, the family company succeeded in displacing the Vogler group from fifth place in the ISN rankings. The Vogler group, which is currently subject to insolvency proceedings, lost almost twelve per cent of its pigs last year, slaughtering only 2.03 million animals.

The seventh and eighth places were taken, as last year, by the Böseler Goldschmaus and Tummel slaughter companies, which respectively processed 4.7% and 2.6% more pigs than in 2015. The Garrel-based company BMR, however, was excluded from the list because, according to ISN, it is purely a contract slaughter company. Accordingly, the Rhineland-Palatinate family company Simon Fleisch moved up to ninth place by increasing the number of pigs slaughtered by 1.0 per cent to 1.04 million units. A new entry in the top 10 rankings was Düringer Fleischkontor from Loxstedt which processed 960,000 pigs last year.

According to the ISN market expert Matthias Quaing, the slaughterhouses will have to cope with lower pork supplies overall and rising prices in 2017.