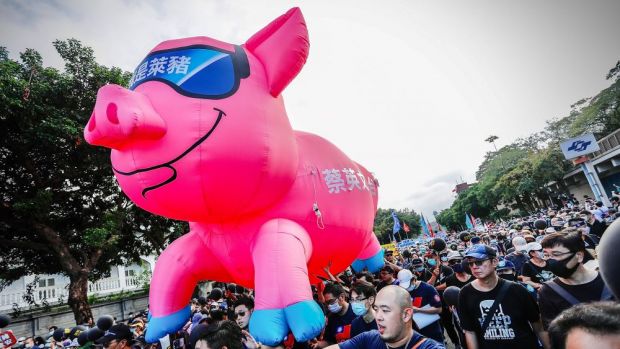 The decision led to demonstrations in the capital Taipei.

TAIWAN, Taipeh. Thousands of citizens protested against imports of US goods. The problem is the use of a growth promoter.


Taiwan wants to allow imports of pork containing residues of the growth promoter ractopamine from the beginning of 2021. The country's food authority had already informed the World Trade Organization (WTO) of the plan at the beginning of September, from which above all suppliers from the United States of America would benefit.

In Taiwan, the decision triggered demonstrations in the capital Taipei and a political dispute between the government and the opposition in parliament. The country's largest opposition party, Kuomintang (KMT), shares the concerns of the demonstrators and has threatened to reverse the decision by means of a referendum. Taiwanese pig producers also reject the release of ractopamine because they themselves are not allowed to use the feed additive. Therefore they fear a competitive disadvantage and price pressure from growing imports.

The use of ractopamine in animal fattening is widespread in the USA and complies with WTO standards. However, in some countries, including China and the EU states, its use is prohibited. The EU and China, as well as Taiwan, do not allow imports of meat produced with the help of the additive.

Taiwan is currently negotiating a trade agreement with the USA. The USA is pushing for a facilitation of meat imports - a demand that the government in Taipei apparently wants to fulfill. For Taiwan, closer economic ties with the USA are particularly important after the country was denied participation in the free trade zone RCEP, to which 13 Asian countries plus New Zealand and Australia belong, due to pressure from China. China considers Taiwan to be a breakaway province and the United States is considered a protective power that guarantees the country's sovereignty. Therefore, the government in Taipei is interested in good relations with the Washington administration and was one of the profiteers of the trade dispute between the USA and the People's Republic of China