Rabobank: How the modern poultry industry is ...
Rabobank

How the modern poultry industry is taking shape in Africa 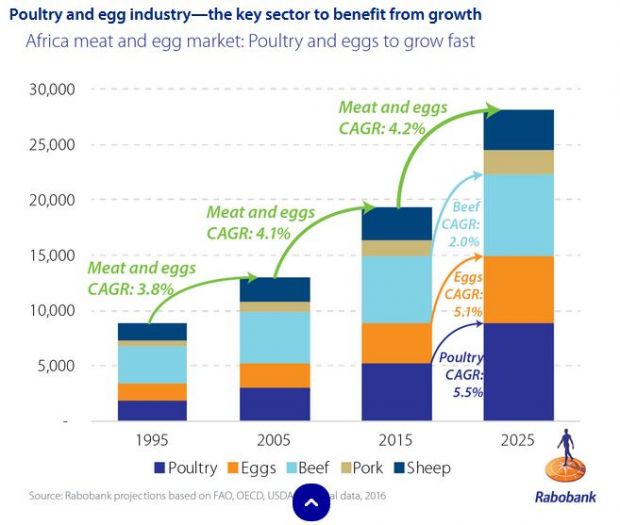 NAMIBIA, Windhoek. According to RaboResearch’s latest report, ‘Time for Africa: Capturing the African Poultry Investment Opportunity, many international retail and quick-service restaurant (QSR) investments in the region are of South African origin and this they said could provide the industry with a good sales platform. This was reported by the Namibia Economist.

South Africa is well on its way to profit from the bullish industry in sub-Saharan Africa as Africa takes its place on the world stage at a time when the industry is moving from a national to regional base to a more global platform.

The year-on-year growth in the global poultry markets is set to continue with a 60% demand growth expected over the next 20 years. Movement has already started in the industry but the focus so far has been on the southern region, with countries like Zambia, Mozambique and Botswana relying less on western and eastern Africa.

According to the report, this is gradually changing as companies move further up north to capture untapped opportunity. Furthermore the report said this leads to significant global investment streams in an industry that is evolving, from a national and regional basis to a more global platform.

“Driven by a rising middle class and rapid urbanisation, a more modern poultry industry is taking shape in Africa”, according to Rabobank Senior Animal Protein Analyst Nan-Dirk Mulder. The growing middle class is changing its consumption patterns, moving from vegetable-based consumption to a more protein-rich diet. In this shifting diet, poultry and eggs are the protein of choice for African consumers – as these protein sources are affordable and available, but also because consumers prefer the taste of chicken and eggs over other proteins. Poultry availability is supported by the short payback times for poultry and egg production, making poultry production easier to start up and expand.

Furthermore, many Sub-Saharan African countries like Nigeria, Angola, Zambia and Zimbabwe have the potential to further increase their feed ingredient supply, which could support a more competitive supply of poultry in these countries, as feed costs make up around 70% of total costs. New investments in supermarkets and quick-service restaurants have responded to the opportunity of a rising African middle class that is expanding across the continent, pulling new investments into the region. Modern poultry supply chains are also attracting investors, with companies usually starting with feed mills and hatcheries, and building from there.

According to Mulder, the African poultry and egg industry is in a fast growth mode, which offers various opportunities for international investors in several areas such as meat processing, developing a modern poultry value chain that incorporates breeding and establishing a modern breeding supply chain.

However, RaboResearch’s findings suggest that this African poultry investment opportunity is not easy. It requires a pioneering spirit, a good market and risk assessment, capable local partners and patience, as investment risks can be high. If done well, the rewards can be large, especially for companies that move early.