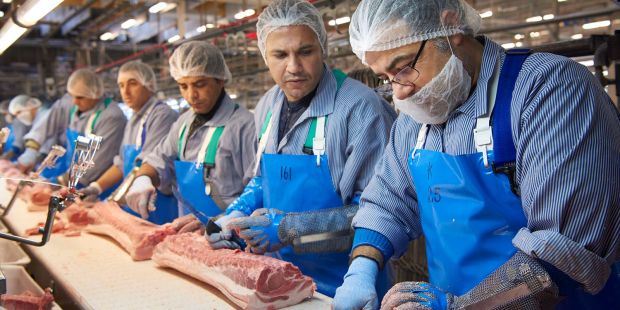 New production line to serve the Japanese market creates up to 100 new jobs at the abattoir in Blans near Sønderborg.

DENMARK, Sønderborg. The Japanese consumers and restaurants have for decades had a strong preference for Danish pork, which is still growing. Danish Crown is therefore establishing a new production line at the abattoir in Blans near Sønderborg, which will increase the number of employees by almost 10% from 1,100 to 1,200.


“It's great to be in a situation where we're taking on new people, especially when we here are talking about permanent jobs, which are not affected by fluctuations in the supply of pigs. Our Japanese customers are crazy about a specific product based on minced pork, which we have sold to them for a few years. This means that we now need to hire more people to both debone fore-ends and run the actual production,” says Søren F. Eriksen, CEO of Danish Crown Pork.

The EU and Japan have just signed a free trade agreement, which will be implemented continuously over the next ten years. The agreement will gradually simplify the very complex customs system applied by Japan today, so we expect that increasing exports to Japan will lead to even more jobs in the coming years.

“Our Japanese customers are very interested in developing our trade. Today, the Japanese almost exclusively buy fresh meat, which they process and pack themselves. Several of our customers wish to change this and want us to handle as much of the processing as possible. If this becomes the case, we'll need even more people,” adds Eriksen.