From Editor fleischwirtschaft.com
Sunday, May 26, 2019 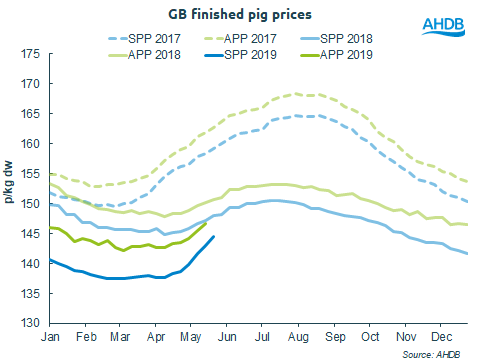 The latest increase in the pig price is an insult to the hard work of the industry, NPA chairman Richard Lister has told processors.

UNITED KINGDOM, Stoneleigh Park. The latest increase in the pig price is an insult to the hard work of the industry, NPA chairman Richard Lister has told processors.


The NPA has calculated that British pig producers are still losing millions of pounds each month due to the failure of UK pig prices to move in line with clear global trends.

AHDB’s most recent update showed the EU-spec SPP rose 1.51p to average 144.45p/kg last week. While this represents another week of prices moving in the right direction, the meagre increase means that, yet again, UK producers are not receiving anywhere near the returns they deserve, given current Asia-driven global market dynamics.

The price remains just under 3.5p below last year’s level and still behind EU prices, which have surged by more than 30p/kg since early February, while UK prices have gained just 6p.

Although the headline gap between EU and UK prices is currently around 2.6p/kg, the actual gap is much bigger. AHDB estimates that another 6-8p/kg needs to be added onto the EU reference price for a like-for-like comparison to account for issues like levies, deductions and haulage costs UK producers pay. NPA chairman Richard Lister believes the difference could be more than 10p/kg.

Speaking at last week’s Pigs Tomorrow conference, Tulip’s Andrew Saunders blamed the slow rate of UK price rises on processors putting too much pigmeat into storage in the early part of this year due to Brexit stockpiling, along with weak demand.

AHDB said UK prices are now beginning to respond to the high price levels in much of mainland Europe, suggesting the influence of Brexit stockpiles is ‘wearing thin’.