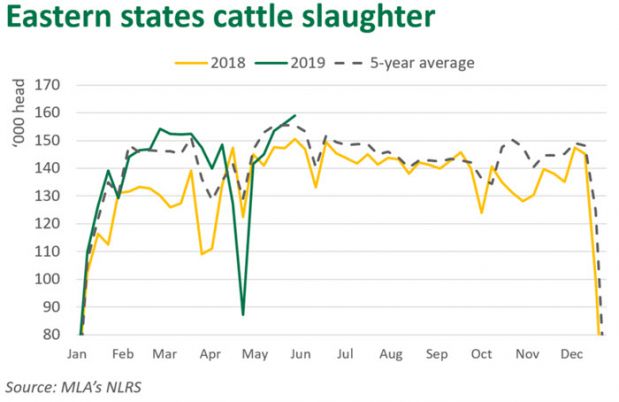 The Eastern Young Cattle Indicator (EYCI) rose 4% week-on-week, to 487¢/kg carcase weight. While the EYCI remains slightly above year-ago levels, the overall lack of restocker competition has kept the indicator 6% below the five-year average.

AUSTRALIA, Sydney. With autumn rain deemed largely a failure in most regions, further destocking of the breeding herd occurred during May. Eastern states weekly slaughter totalled 159,000 head last week, up 2% on the week prior and up 6% on the same week in 2018.


Elevated female slaughter points to the continuation of a significant liquidation phase in the national herd and market reports confirm the prevalence of cows at recent sales. When conditions do improve, breeding stock will find price support, as restockers compete for the limit supply.

At this level, female slaughter in NSW and Queensland remains below the highs of May to June 2015, when an average of 62,000 females were slaughtered per week. That said, the current high numbers are being derived from a smaller national herd.

While many regions are yet to receive a decent break in the season, the store market saw a slight improvement during the week. Heavy steers and cows remain elevated when compared to year-ago levels, supported by strong global demand and a low Australian dollar.