Price volatility can be beneficial

Price volatility can be beneficial

Jos Claeys, Philippe Van Damme and Luc de Lille (left to right) all agree that the European meat industry has potential for the future. Photo: BMO 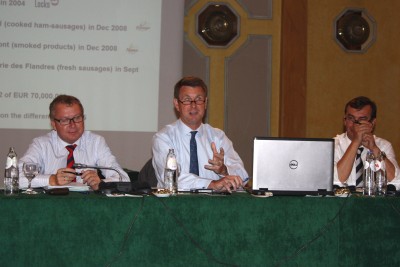 Experts at the 8th Belgian Meat Office (BMO) Roundtable believe that the steadily rising costs of feed, energy, water, logistics and packaging are responsible for the fluctuating profit margins of the Belgian meat industry.

The cost of wheat, maize and soya beans has increased continuously since 2007, said Joris Coenen of the BMO, the sales promotion organisation for Belgian meat, in the discussion entitled "Speculation and price volatility - Challenges for the meat industry" which was attended by journalists from seven European countries. Also taking part in the discussion were Jos Claeys (Westvlees), Philippe Van Damme (Locks) and
Luc de Lille (Groep de Brauwer) as representatives
of Belgian export companies.

According to Coenen, feed accounts for 75 percent of pig fattening production costs. At a time of stagnant retail prices for meat, this has exacerbated profit fluctuations. The question arises, it was claimed, of whether meat prices should not be linked more closely to those of feed. Nevertheless, Jos Claeys believes that growth is achievable in his sector. As the Westvlees boss explained: "Margins can be maintained if the entire carcass can be sold."

Pigs: 11 million units per year
Meat exports worldwide: 880,000 t
- of which, pork: 735,000 t
Exports, by country: Germany 38 %; Poland 11 %; Netherlands 7 %;
Italy 6 %; United Kingdom 5 %
Alongside expensive feed, further factors impacting on the market stability are the rising costs of energy, water and logistics, support for biofuels and the weather. Philippe Van Damme of Locks, which exports 85 percent of its processed meat, cited currency fluctuations as a further factor.

High volumes buffer the impact at times of crisis

There was general agreement that the European meat industry can look to the future with a degree of optimism. China may produce half of the 100 million tonnes of pork marketed worldwide each year, yet Europe still contributes 20 to 25 percent. However, the Belgian company owners also pointed out that the availability of cheap technologies in the Community have led to overcapacities in slaughtering and cutting. And because only players who aim to produce large volumes can emerge stronger from crises, they are therefore predicting that smaller and less well organised businesses will disappear in the future.

As Coenen, BMO head of marketing, noted, the Belgian exporters have posted significant growth just recently, especially in Eastern Europe. Since joining the EU on 1 January 2004 Poland has emerged as Belgium's second largest trade partner for pork. It takes eleven percent of Belgium's exports. Accounting for 39 percent, Germany remains the number one importer. The total amount of pork exported last year was 735,000 t, which was slightly down on the previous year's figure of 739,600 t.