Pork: US pork exports up
Pork

US pork exports up 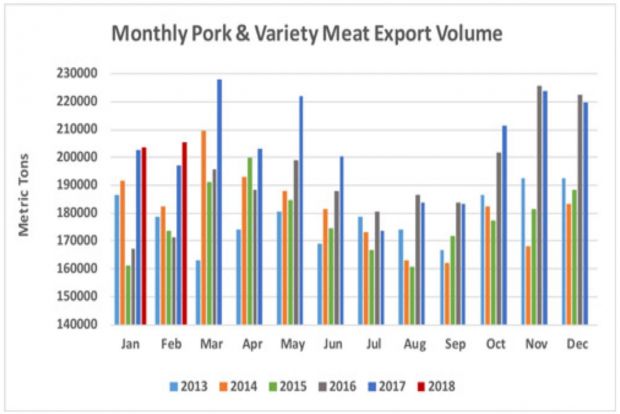 USA, Washington. February exports of US pork were higher than a year ago in both volume and value, according to statistics released by USDA and compiled by the US Meat Export Federation (USMEF).

February exports accounted for 27.8% of total pork production and 24% for muscle cuts only – up from 27.6% and 22.9%, respectively, a year ago. Through February, the percentage of total pork production exported was slightly lower year-over-year at 26.1%, while the percentage of muscle cuts exported edged higher to 22.7%. February export value averaged $56.78 per head slaughtered, up 9% from a year ago. Through February, per-head export value was $53.70, up 5%.

Pork exports to South Korea climbed 33% in volume (40,710 t) and 43% in value ($119 mill.). Most US pork products now enter the Korean market duty free under the Korea-US Free Trade Agreement (KORUS), and high-quality, affordable US pork is helping to underpin Korea’s record-breaking pork consumption. USMEF continues to help position US pork in new and exciting ways in Korea, including the addition of pulled pork to many restaurant menus, a selection of high-end sausages at convenience stores and a wide array of home meal replacement and snack items sold at retail and through e-commerce.

Through the first two months of 2018, other highlights for US pork include:

• Led by strong growth in Colombia and Peru, pork exports to South America were 9% ahead of last year’s pace in volume (17,855 t) and 14% higher in value ($43.1 mill.), with consumption growth in the region continuing to outpace domestic production.
• Solid growth in Honduras, a doubling of exports to El Salvador and a steady performance in Guatemala pushed pork export volume to Central America 16% above last year’s pace at 12,255 t, while value climbed 20% to $28.9 mill. Exports also increased year-over-year to Nicaragua, Panama and Belize.
• Exports to the Philippines, the mainstay destination for US pork in the ASEAN and the region’s largest import market, increased 3% in volume (4,746 t) and remained steady with last year’s pace in value ($10.8 mill.). Exceptional growth in Vietnam (901 t valued at $3.7 mill., up 272% and 469%, respectively) pushed exports to the ASEAN region 18% higher in volume (6,178 t) and 29% higher in value ($16.9 mill.). Exports also increased year-over-year to Singapore, Indonesia and Malaysia.
• In China/Hong Kong, pork export volume fell 14% year-over-year to 69,515 t, but value increased 3% to $164 mill. Muscle cut exports increased 7% to 28,775 t, while variety meat exports declined 24% in volume (40,740 t) but with sharply higher prices value only dipped 2% to $107.4 mill. The Chinese government recently imposed a 25% tariff on imports of US pork and pork variety meat, in addition to the 12% tariff already in effect in China. The higher tariff rate is not reflected in the January-February results, as it took effect 2 April. But the additional tariff will put US pork at a significant disadvantage compared to China’s other major suppliers: the European Union, Canada, Brazil and Chile. China’s total import demand has also slowed with its rebound in domestic production and a significant decrease in domestic hog prices.