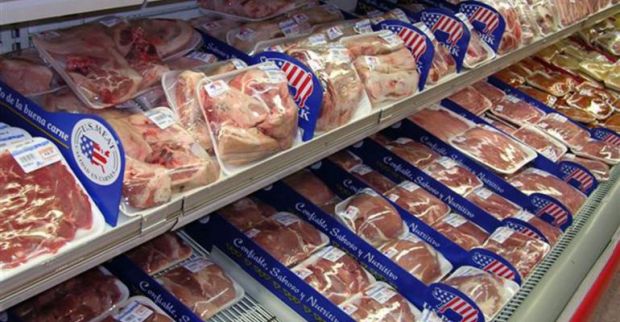 
Pork exports accounted for 24.7% of total pork production, down from 26.2% a year ago. For muscle cuts only, the percentage exported declined slightly to 21.5%.

Building on a record 2017 performance, January pork exports to Mexico increased 1% from a year ago in volume (72,997 t) and 4% in value ($133.5 mill.). Mexico continues to be a mainstay market for US hams and is the second-largest destination (behind China/Hong Kong) for pork variety meat.

Other January highlights for US pork included:

• Led by solid gains in mainstay markets Honduras and Guatemala and exceptional growth in El Salvador, pork exports to Central America increased 18% in volume (6,179 t) and 20% in value ($14.5 mill.).

• Year-over-year increases in both Australia and New Zealand pushed export volume to the Oceania region up 10% to 7,613 t, while export value increased 15% to $22.2 mill. Pork exports to Oceania are primarily composed of raw material for further processing, with Australia being one of the leading destinations for US hams.

• Led by strong growth to Vietnam, January export volume to the ASEAN region climbed 16% to 3,053 t and value was up 17% to $7.9 mill. The strong performance in Vietnam helped offset lower exports to the Philippines, the region’s largest destination for US pork.

• Reflecting larger domestic production in China and correspondingly lower hog and pork prices, exports to China/Hong Kong fell 16% to 31,997 t, but still achieved a 2% increase in value to $77.9 mill. For muscle cuts only, exports to China/Hong Kong increased 10% in volume (12,827 t) and 14% in value ($25.6 mill.) from a year ago, but slowed from the fourth quarter pace when shipments gained momentum ahead of Chinese New Year. Following two big years, January pork variety meat exports to the region were the lowest since 2015.