Pork: Rapid start to 2020 for US exports
Pork

Rapid start to 2020 for US exports 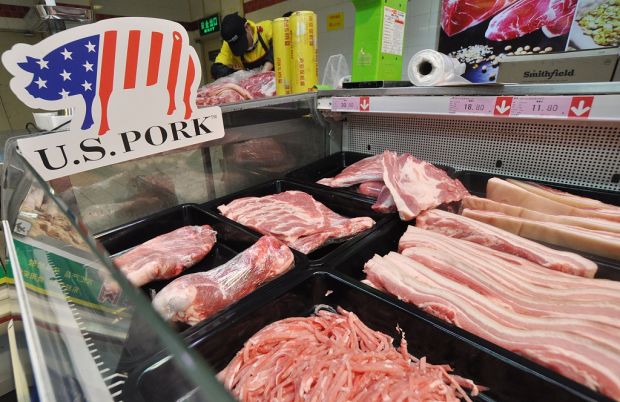 USA, Wahington. Following a record-breaking performance in 2019, US pork exports maintained a torrid pace in January, according to data released by USDA and compiled by the US Meat Export Federation (USMEF).

January pork exports cooled slightly from the volume and value records established in December 2019, but still far exceeded year-ago levels. Both the January export volume of 273,603 t, up 36% year-over-year, and export value ($738.7 mill., up 50%) were the second highest on record. Export value per head slaughtered was $62.53, up 40% from a year ago. Exports accounted for 29.8% of total pork production and 27.4% for muscle cuts only, up substantially from last January's percentages (23.6% and 20.3%, respectively).

Release of the January export data comes as Coronavirus is dominating news headlines, including those related to global trade. USMEF President and CEO Dan Halstrom said the virus has had an impact on red meat exports, which will likely be more evident in February and March data, but a number of supply and demand fundamentals and market access improvements have underpinned continued strong export volumes.

"The first quarantine actions in China were taken in late January and the calendar had turned to February before Coronavirus became a major health concern in countries such as South Korea and Japan," Halstrom said. "But despite logistical challenges, a severe decline in tourism and a notable impact on sit-down dining, overall demand for red meat in these markets is quite resilient. Retail meat sales have remained strong and both retailers and restaurateurs are utilizing e-commerce and delivery services at unprecedented levels. While it's definitely a challenging situation, the Asian food industry is adapting to these conditions and finding creative ways to accommodate consumers."

Pork exports to China/Hong Kong continued on a blistering pace in January, easing somewhat from the record volume reached in December but still increasing 263% from a year ago to 97,002 t and climbing 361% in value to $245.3. The year-over-year increase was even more astonishing for pork muscle cuts, which were up 814% to 76,281 t, valued at $194.7 mill. (up 1,297%). January exports included a significant share of carcasses (boxed primals), which totaled 35,358 t, up from zero last year.

Exports to Mexico, which were hampered by retaliatory duties in the first five months of 2019, increased 6% from a year ago in volume (70,460 t) and jumped an impressive 40% in value to $134.7 mill. Chilled bone-in ham and shoulder cuts remained the largest category for Mexico, totaling 42,542 t, up 11% from last year and accounting for 75% of the chilled/frozen cut volume. Unit export values for pork cuts exported to Mexico were up 36% from last January.

January shipments to Japan, the perennial value leader for US pork exports, were down 4% from a year ago in volume (31,578 t) and 2% lower in value ($132.6 mill.). But Japanese import data paint a brighter picture, showing imports of chilled US pork were up 13% to 17,890 t. Imports of ground seasoned pork were record-large at 12,944 t, up 95%, illustrating the importance of a restored level tariff playing field. USMEF projects an upward trend in Japan in 2020, due in part to tariff relief provided in the new US-Japan trade agreement. The next round of tariff reductions will come 1 April, when the Japanese fiscal year begins.

Other January highlights for US pork exports include:

•Exports to Oceania, which were record-large in 2019, continued to climb, reaching 11,961 t (up 29% year-over-year) valued at $38.5 mill. (up 55%). Exports to Australia set a new record in January, reaching 10,723 t (up 29%) valued at $34.1 mill. (up 53%). Australia and New Zealand are key markets for hams and other muscle cuts used for further processing and value-added US processed products are also rapidly gaining popularity.

•Pork exports to Canada were 18,767 t in January, up 16% from year ago, while value increased 14% to $66.2 mill. Canada's pork exports to China resumed in November after a five-month suspension, so tighter domestic supplies should translate to expanded opportunities for US pork again in 2020.

•Exports to Vietnam, where domestic production has been heavily impacted by African swine fever, increased 137% from a year ago to 1,105 t, valued at $2.1 mill. (up 23%). Vietnam's demand for US pork variety meat increased significantly in the second half of 2019 and that trend continued, with variety meat exports accounting for 44% (490 t) of the January volume.