QS yields to the pressure 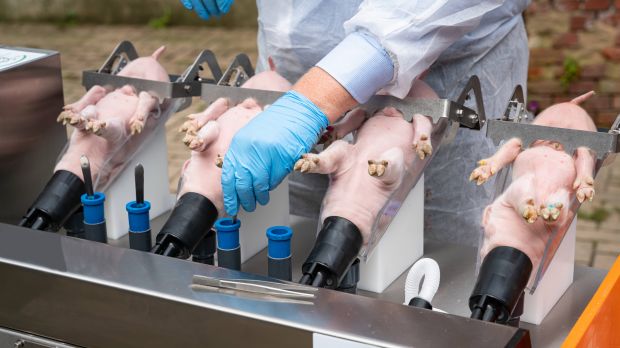 German legislation prescribes the elimination of pain by means of anesthesia, while in other countries pain relief, for example through local anesthesia, is considered sufficient.

GERMANY, Bonn. In the QS system, the same rules should now apply for domestic and imported piglets after all.


German QS Qualität und Sicherheit GmbH wants to adapt its animal welfare standards for piglets and thus create a level playing field between domestic and foreign piglet producers. The QS Advisory Board for Cattle and Pigs decided yesterday to clarify, together with all economic partners, "the feasible QS standard for tomorrow", which is to apply to both domestic production and imports and regulate questions regarding piglet castration and the implementation of the Animal Welfare Ordinance on Animal Husbandry.

QS managing director Dr. Hermann-Josef Nienhoff announced the presentation of a master plan, which is to give orientation for pig farmers and also for governments and licensing authorities. The sow farmers in Germany need clarity and reliable partners; therefore the master plan will apply to all of them in the future, Nienhoff made clear. According to the Managing Director, he is aware that QS has a key role to play in this respect.

Specifically, according to QS, a positive list for piglet castration should be defined, which will be valid for all QS system partners at home and abroad. This should provide planning security for all and make a decisive contribution to securing the future of sow management in Germany.

With this procedure, the Bonn-based company is apparently reacting to the criticism of producer associations and also the German Farmers' Association (DBV), which had warned of an imminent unequal treatment of German and imported piglets. According to German law, a complete elimination of pain is demanded from January 1, 2021, when piglets are castrated.

According to the Association of Livestock and Meat Producers' Associations (VEZG), Danish and Dutch sow farmers and the majority of competitors in the European Union cannot guarantee this with the methods used there. Without changes in the QS rules, the VEZG states that the animal welfare requirements applicable in this country could be undermined by imported piglets, which would be associated with considerable competitive disadvantages for German sow owners.