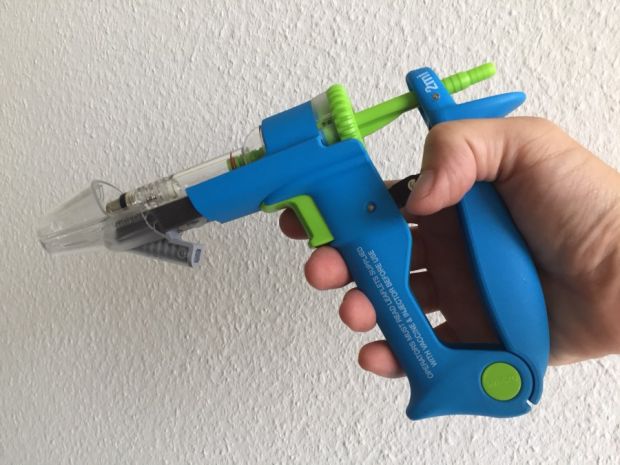 Pistol for the vaccination of pigs.

GERMANY, Rheda-Wiedenbrück Vaccination as an alternative to castration shows first successes. Results of the first 30,000 pigs are estimated to be available in the first quarter of 2020.

There is movement in the discussion about alternatives to unanaesthetised piglet castration. Large meat processors such as the Tönnies Group or Vion have announced that they will accept male fattening pigs treated with Improvac without restrictions at selected sites.

Among the producers, the regulation that has been in force at the Tönnies Group to date, for example, to make substantial deductions for animals vaccinated with Improvac according to the criteria of accounting for boars, had caused displeasure and uncertainty. In the past few days, the Tönnies Group had announced its participation in the so-called "100,000 Improvac Boar Project". The delivered animals would be accounted for according to the regular price mask, deductions for boars as in the past would not result. Only slight price reductions of three cents per kg slaughter weight would be made. Reason for it: the investigation expenditure increased due to the smell sample.

The readiness of the slaughtering enterprises is a significant progress for the pig fattening enterprises looking for goal-prominent alternatives, says vice-president Dietrich Pritschau of the farmer federation Schleswig-Holstein. Pritschau, who is himself a piglet producer and pig farmer, is regarded as the initiator of the 100,000-boar project. Since the beginning of 2019, he has supplied around 1,000 animals treated with Improvac to cooperating slaughter companies such as Heinz Tummel GmbH & Co KG. The pigs are treated by a vaccination team of the Improvac manufacturer Zoetis.

The evaluation of the data had produced positive results, emphasised Pritschau. There had been no "failures" and the meat quality was absolutely comparable with that of the castrated animals.

With the participation of other slaughterhouses and meat processors, the number of vaccinated animals examined is continuously increasing. Pritschau assumes that results for up to 30,000 pigs will be available in the first quarter of 2020. The association official is therefore confident that the project will lead to the development of a practicable alternative method for anaesthesia-free piglet castration for many farms. After lengthy discussions, the legislator decided in December 2018 to grant the ban on non-anaesthetic piglet castration another transitional period of two years. From January 2021, castration without anaesthesia will be banned in Germany.

As an alternative, three procedures are available: the rearing of the male animals without intervention (boar fattening), the castration after complete anaesthesia with the anaesthetic gas isoflurane as well as the renunciation of castration by the so-called vaccination with the preparation Improvac. A "fourth way" via local anaesthesia before castration, demanded by representatives of agriculture and the butcher's trade, seems impossible for Germany, in contrast to Denmark for example, for the foreseeable future.

The regional farmers' associations in North Rhine-Westphalia, Lower Saxony, Schleswig-Holstein and Mecklenburg-Western Pomerania have initiated the "100,000 Improvac Animals" project. The company Zoetis provides the vaccinations and their documentation, and supports each Improvac animal with one Euro. For the animal owners, this means costs of two euros per animal for the vaccine (two vaccinations).