SocialLab - Animal husbandry in the mirror of society 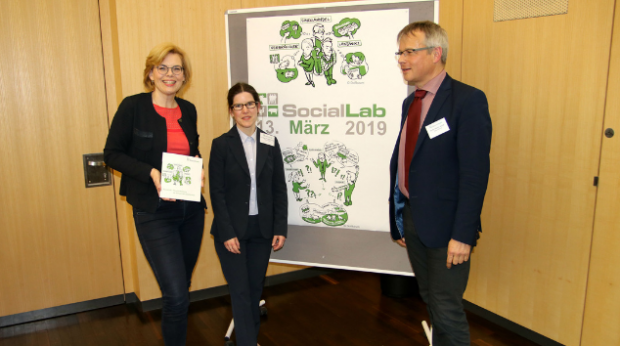 Federal Minister Julia Klöckner (left) with the partners of the "SocialLab" project at the BMEL in Berlin.

GERMANY, Berlin. The keeping of farm animals is increasingly being questioned critically by the public; social ideas and modern agricultural practice are sometimes far apart. The joint project "SocialLab" is located in this context.


Since 2015, an interdisciplinary scientific consortium led by the Thünen Institute has been investigating the social view of livestock farming. The aim was to obtain a differentiated picture of the development of perceptions and expectations and thus of existing social criticism.

With surveys, the analysis of purchasing data, eye-tracking, but also with innovative neuroscientific methods, they examined how the individuals perceive animal husbandry in agriculture and how the retail trade assesses the marketing situation.

The Federal Ministry of Food and Agriculture (BMEL) funded the three-year project with almost € 2.4 mill. The objectives of the project were:

The approach of the SocialLab is that it is fundamentally about better understanding. On the one hand, the scientists researched the question of how citizens perceive animal husbandry, on the other how farmers perceive their own animal husbandry and where criticism is expressed by both sides. The results of joint discussion rounds with consumers and farmers show that:

SocialLab shows the need for a discussion format on questions of the market economy, social or political implementation of the further development of livestock farming from the point of view of various stakeholders. What is needed are discussion platforms for a participatory multi-stakeholder discourse that develops realistic perspectives for the development of socially acceptable livestock farming.