Partnership: New path for the feeding of poul...
Partnership

New path for the feeding of poultry 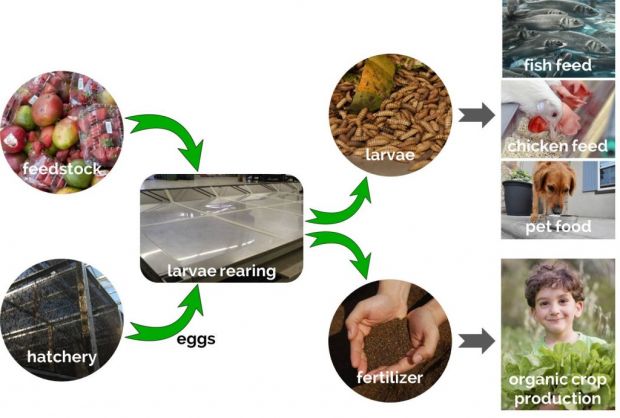 After a 14-day feeding cycle, the larvae from the black soldier fly are harvested and processed into sustainable animal feed ingredients.

GERMANY, Visbek. When talking about the sustainable production of poultry meat, one aspect is always high up on the agenda: animal feed and soy and soybean meal from overseas. With its participation in the Canadian company Enterra Feed Corporation, the PHW Group has now found a suitable partner to this end.


“We are involved in many scientific projects looking at the replacement of soybean meal with other albuminous feeds. In future, we aim to forgo the addition of soy in our poultry feed as far as possible and regard the insect protein developed by Enterra as a suitable source of protein”, explained Peter Wesjohann, CEO of the PHW Group.


A number of complex and costly feeding studies will be necessary until the feed component soy can be replaced with insect protein as the changed composition of the feed must be commensurate with animal health and thus also animal well-being.

Geoff Gyles, CEO Enterra Feed Corporation, commented: “For us, the PHW Group’s involvement in Enterra goes far beyond a mere financial investment: on the one hand, the PHW Group is providing us with its entire know-how of poultry feeding and, on the other, as soon as the approvals are available in Europe, we will be working practically and for feeding studies with the poultry farms in the PHW Group.”

The Enterra Feed Corporation produces and markets feed supplements which are harvested from the larvae of this useful insect which is naturally found in the world’s tropical and temperate regions. The larvae can be bred under controlled conditions on locally procured food waste which contains valuable nutrients which would otherwise be lost. Instead, the insect larvae consume the nutrients from the waste and convert these into usable protein, fat and energy. The larvae are then dried to produce Enterra Whole Dried Larvae or further processed into Enterra Meal, a powdered protein component and Enterra Oil, a natural feed oil.

Enterra is registered in the EU Trade Control and Expert System (TRACES), which means that the company can export its insect feed ingredients into all member countries of the European Union. A new EU Regulation came into force on 1st July 2017 which permits the use of insect ingredients in aquaculture feed. Approvals for poultry and pig feed are also expected.