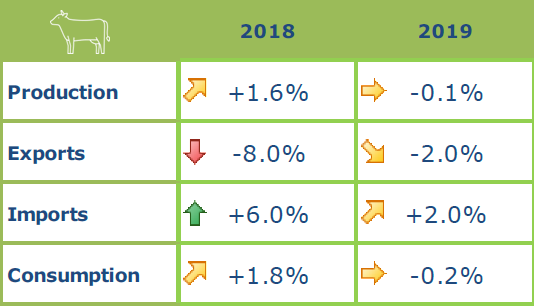 A continued small increase in beef production and higher imports are expected to lead to a slightly higher utilisation of beef. Pigmeat supply grows while exports struggle to follow, keeping prices down. Poultry imports are down as Brazilian supply falls, sustaining rising prices as EU production increases.

BELGIUM, Brussels. The Short-term outlook is based on reflections of market experts within the Directorate General for Agriculture and Rural Development of the European Commission, using the latest data available. It is published three times per year (in late winter, early summer and early autumn).

According to the May-June 2018 livestock survey, the total cow herd in the reporting Member States15 was 0.6% smaller than a year before. Most Member States, now including Poland, reduced their suckler cow herd (by 1.5% or 130,000 heads).

EU net beef production is expected to increase in 2018 (+1.6%) and to stagnate in 2019. This is significantly above previous expectations, as it includes higher slaughterings due to drought and the significant reduction in the beef herds in France, the UK, Italy and Austria. From September onwards, slaughterings are expected to slow down, due to recent rainfall and more favourable pasture conditions. Still, winter slaughterings may increase, due to a shortage of forage (silage or dried fodder).

EU beef exports in 2018 as a whole are expected to be 8% lower than in 2017, returning to the 2016 level. There is reduced potential for expansion, inter alia in Turkey, where much will depend on the economic situation. Key world players (the USA, Australia, New Zealand and Brazil) are exporting more to traditional EU export markets (Hong Kong, Israel, Switzerland and the Philippines) and are expected to continue putting pressure on the world market in 2018. The export downturn should level out somewhat in 2019 (-2%), as EU shipments (mainly of low-value cuts) to smaller markets start to grow and access to certain markets opens up again.

Apparent consumption of beef in the EU is expected to increase moderately to 11 kg per capita (retail weight) in 2018 (+1.8%). This reflects higher domestic supply, backed by solid imports and declining exports.

Global pork trade could face significant shift in trade flows in the second half of 2018, due to trade tensions and the possible impact of African swine fever (ASF), which is spreading quickly in China, the main world producer and importer, and has affected some EU Member States.

EU pigmeat prices were below the last four-year average in January-August 2018 (-7%), remaining around € 145/100 kg between March and mid-August, when they rose as supply tightened after the very hot summer slowed animal growth and delayed slaughterings.

Prices will remain under pressure, as production is still expected to increase by the end of the year, while much will depend on trade developments in the face of current uncertainties. Additional pressure will come from the historically low prices for exports from the EU’s main competitors (USA, Brazil and Canada).

In the first half of 2018, EU poultry meat production was expected to grow year-on-year, given the impact of bird flu the previous winter. However, growth was higher than expected (+4%), driven by a reduction in imports from Brazil, which kept EU prices higher than in the previous two years. Current production levels are expected to continue for the rest of the year. Taking into account the (already high) output in the second half of 2017, growth for the year is expected to be slightly above 2%. In 2019, production could stabilize, but this will depend on the timing of a complete resumption of trade with Brazil.