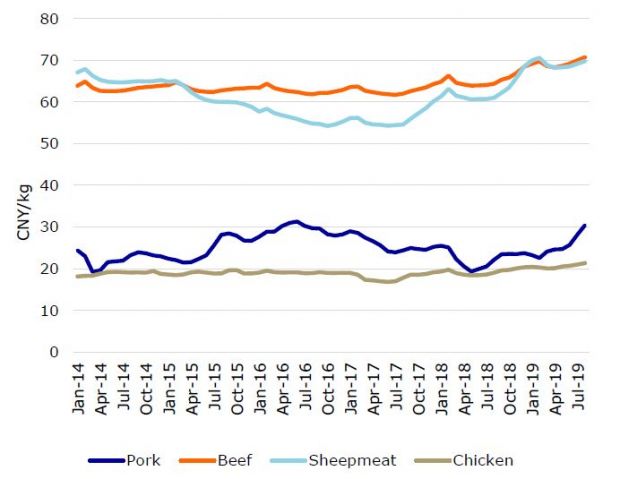 Retail prices of other proteins are also rising, influenced by pork

THE NETHERLANDS, Utrecht. African Swine Fever (ASF) is changing the flow of animal protein in the world. Especially Asia struggles to mitigate the impacts of the disease on herds and pork production, a report by Rabobank details.


Justin Sherrard, global strategist – Animal Protein, RaboResearch Food & Agribusiness outlines in the new report „African Swine Fever: A Global Update“ that rebuilding takes at least five years for the worse-affected countries and is to date still a risk. New cases of ASF in Europe are showing, that managing the disease is challenging in most geographies.

The situation in China isn’t getting any better. Rabobank expects production losses of 25% in China in 2019 and losses of 15 to 20% in Vietnam. Herd loss is forecast at 50% for the whole year. Declines in pork production have been slower due to the herd liquidation during the first half of the year. „The scale of the decline expected in China in 2019 is unprecedented – and will lead to even lower pork production in 2020,“ commentes Sherrard the situation.

August live hog and pork meat prices have not yet reached peak in China as a result of an overall shortage of supplies of pork. To fill the void left by tightening supplies, production of other proteins such as poultry, eggs, seafood and beef are rising, according to the report. The report details that poultry will benefit the most from pork substitution.

Also, China is increasing imports of animal protein. Despite the trade war between the United States and China, US exports to China are recording strong volumes despite high tariffs, Sherrard noted. The European Union is the leading exporter of pork to China.