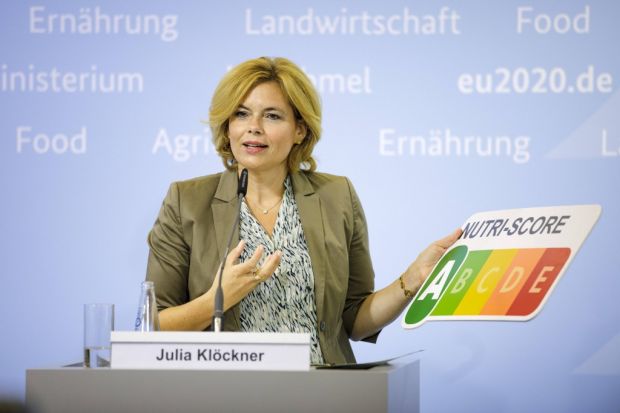 Photo: imago images / photothek
The Federal Cabinet approves a regulation introducing the Nutri-Score. According to Federal Minister of Agriculture Julia Klöckner, the required notification to the European Union is running in parallel.
fleischwirtschaft.com — GERMANY, Berlin. The introduction of the extended Nutri-Score nutritional labelling system in Germany has taken a step forward. As the Federal Ministry of Agriculture announced, the corresponding regulation was approved by the Federal Cabinet last Thursday.
Facebook
Twitter
It is intended to allow the legally compliant use of the mark for foodstuffs placed on the market in Germany. The aim is to simplify a healthier everyday diet, including with ready-made products.

According to head of Ministry Julia Klöckner, the required notification to the European Union is running in parallel. The standstill period will end in September. The Bundesrat will then probably deal with the regulation in October. The regulation should come into force in November at the latest. However, the labelling could not be obligatory due to EU law, Klöckner said. Therefore, she wants to push the development of a uniform EU-wide extended nutritional labelling in Brussels.

In addition, the Federal Ministry of Agriculture was currently working on practical simplifications for the use of the Nutri-Score by companies, reported Klöckner. For example, the Ministry has published German translations of the French texts on its website, for example for the registration procedure. In addition, an information campaign for consumers and the economy is planned.

"We are on the verge of successfully implementing one of the major food policy projects", the Minister emphasised. She said that Nutri-Score provided consumers with easily understandable and comparable information, thus enabling them to find their way around supermarket shelves. "I have a clear expectation that companies will make use of the labelling", said Klöckner. The Federal Government is now creating the conditions for this.