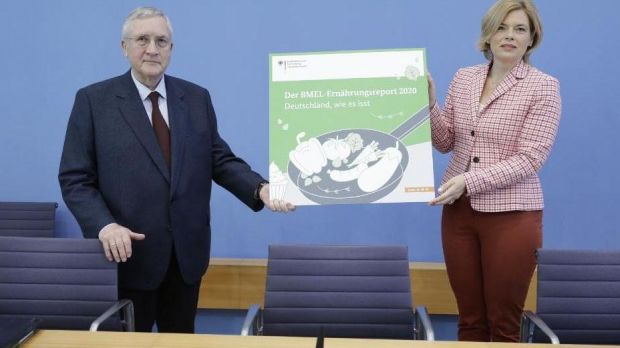 GERMANY, Berlin. During the crisis, consumers are discovering the advantages of regional supply. Agriculture Minister Julia Klöckner wants to use the momentum and turn it into a trend.

"Domestic production has become more important in the wake of the Corona crisis," said Federal Minister of Agriculture Julia Klöckner (CDU) today at the presentation of the Food Report 2020 in Berlin. The crisis had influenced consumers' eating habits and the appreciation of regional agriculture had increased. This was shown by a survey conducted by the opinion research institute Forsa, which the Federal Ministry of Agriculture (BMEL) had commissioned in addition to the regular survey for the Nutrition Report. In April 2020, Forsa asked around 1,000 consumers what influence the corona crisis had on their shopping, cooking and eating habits.

Nutrition Report 2020
On behalf of the Federal Ministry of Food and Agriculture (BMEL), the opinion research institute Forsa surveyed around 1,000 German citizens aged 14 years and over on their eating and shopping habits by telephone between December 2019 and January 2020 - for the fifth time since 2015. forsa also asked around 1,000 German citizens in April 2020 in a representative survey what influence the corona crisis has on their shopping, cooking and eating habits. The most important results from both surveys are summarised in the Nutrition Report 2020.

Results of the additional survey "Nutrition in the Corona Crisis":

"I want to use this momentum and turn it into a trend," Klöckner continues. However, the head of department of the BMEL rejects state guidelines. "Consumers do not need that. I am convinced of that." She merely wants to make it easier for consumers to make healthy choices. To this end, the Nutri-Score nutritional labelling, which can be voluntarily introduced on food products, is the means of their choice.

In addition, the results of the current nutrition report show that consumers are in favour of a state animal welfare label:

Klöckner commented: "The verbal willingness to pay more for more animal welfare-friendly products is pleasing. Unfortunately, things often look different at the shop counter". If the consumer is to pay more for a product, says Klöckner. Then they need "transparent information that there is actually more animal welfare". That is why appropriate labelling is so important.

"We are pleased that the local agriculture is held in such high esteem. We farmers want to continue to supply the population with high-quality regional food in the future and at the same time do even more for the environment, climate protection and animal welfare", said Farmers' President Joachim Rukwied in response to the results. However, everyone had to realise that this would not happen for free, but would have to be reflected in a higher price for food, Rukwied continued. "This added value must also reach the farmers."

The consequences of corona infections had shown how sensitive international trade was and that the basic supply of food in one's own country was of elementary importance, said Franz-Josef Holzenkamp, President of the German Raiffeisenverband. This must be reflected in the design of the 'Farm to Fork' strategy recently published by the EU Commission, without falling into protectionism, Holzenkamp continued. In this context, breeding techniques such as the Crispr/Cas gene shear could make an important contribution to counteracting the consequences of climate change and thus continue to be able to provide the market with sufficient quantities of food and feed, Holzenkamp continued.

This week, Klöckner had also once again demonstrated its openness towards breeding technologies such as the Crispr/Cas shear. "We need an unconditional openness to new breeding technologies," she said. Within the 'Farm to Fork' strategy, genetic engineering methods are mentioned as a means of making agriculture less dependent on pesticides.