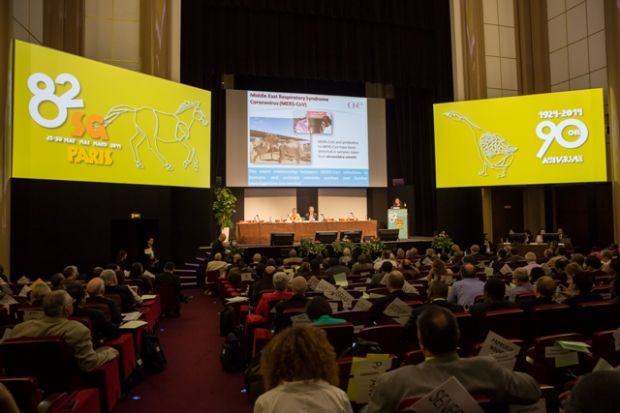 Over 850 participants, representing Member Countries of the OIE as well as numerous international, intergovernmental, regional and national organisations took part in the 82nd Session of the OIE, which marked the 90th Anniversary of the Organisation.

The World Assembly of OIE Delegates adopted 40 Resolutions on the base of a democratic vote: one country-one voice.

The World Assembly of Delegates approved the application of two new countries: Liberia and South Sudan, raising to 180 the number of OIE Member Countries.

OIE Delegates proceeded to the election of the new Vice-President of the Council, Dr Botlhe Michael Modisane, Delegate of South Africa.

During this week, the Assembly examined the worldwide animal health situation, and gave special attention to the latest sanitary episodes of importance: the porcine epidemic diarrhoea (PED) in some countries of America and Asia, the Middle East respiratory syndrome coronavirus (MERS-CoV), the bovine spongiform encephalopathy (BSE) or 'mad cow disease' in Brazil, influenza H7N9 and H5N8 in Asia, rabies in Chinese Taipei and the African swine fever (ASF) in Eastern Europe. The latter was treated in one of the technical items during the OIE General Session.

OIE Member Countries exchanged views regarding PED situation. The OIE Director General decided to set up an ad hoc group on the topic. International experts have been identified and will be gathered to elaborate a technical note and provide a risk analysis regarding international trade of pigs and pork products.
Source: OIE