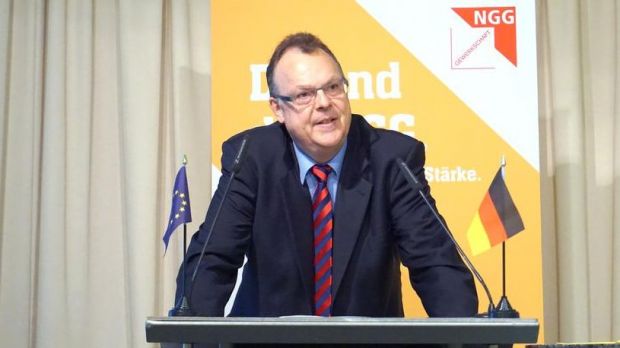 Regards the industry minimum wage merely as the beginning of the end of wage dumping in the meat industry: Claus-Harald Güster, Deputy Chairman of the NGG.


It was no coincidence that the NGG union chose to hold its International Meat Conference in Rheda-Wiedenbrück last week. The theme was: Putting an end to social dumping - Reorganising work in the slaughter industry. "Germany is still Europe's cut-price supplier," criticized Secretary-General Harald Wiedenhofer of the European Federation of Food, Agriculture and Tourism Trade Unions (EFFAT).


Germany's neighbours in Denmark, Belgium and France have also complained strongly to the European Commission. A minimum wage was introduced for the meat industry in Germany in 2014: this is currently EUR 8.60 and is set to rise to EUR 8.75 on 1 December.

However, it still leaves Germany the pariah of Europe: this rate compares to about EUR 25 in Denmark, EUR 23 in Italy and EUR 15 in Belgium. Although the minimum wage has formally been introduced in Germany, in many cases too few hours are paid, travel and clothes-changing times as well as surcharges for night shifts are ignored and home, travel, equipment and clothing allowances are all deducted.

The code of conduct for social standards has significantly improved the housing situation of many workers, yet the advisers at the DGB "Fair Mobility" offices repeatedly report on difficult conditions such as charges of over nine euros per day for a place in a dormitory.

E. Michael Andritzky of the Food Industry Federation (VdEW) in Hanover bravely represented the employers' viewpoint. "Most of those who work here do so voluntarily and gladly," he first pointed out. And they feel discriminated against, if they are labelled as slaves. However in cases where there are problematical conditions and pressure is applied, this is unacceptable and should be stopped, he said.

The Managing Director of the VdEW emphasised that the commitment which the industry entered into a year ago was being fully implemented and that the companies now only employ contract staff under German law. The proportion of companies' own employees has also increased - depending on the particular economic situation. Here, however, Claus-Harald Güster, Deputy Chairman of the NGG, demanded a stronger commitment from the employers. With few exceptions, little has changed in most slaughter companies. Many were still refusing to take responsibility for their employees. Contract worker ratios exceeding 50 per cent are still commonplace, he said. This effectively precludes the principle of co-determination.

Subcontracted labour is there to meet a temporary need for employees or to help companies cope with peaks in demand, but not to take care of the core processes - in this case slaughtering and cutting - said the representative of the NGG union, criticising the slaughter companies. The NGG proposes that companies increase their core workforce by ten per cent per year under collective agreements, similar to the arrangement with Westfleisch. Only collective agreements offer reliable standards and are binding, he said.

The trade unionist explained that the "litmus test" will come in the summer of 2017 when the collective agreement on the industry minimum wage is negotiated. Güster called the voluntary commitment of the industry a step in the right direction, but said that others would now have to follow.