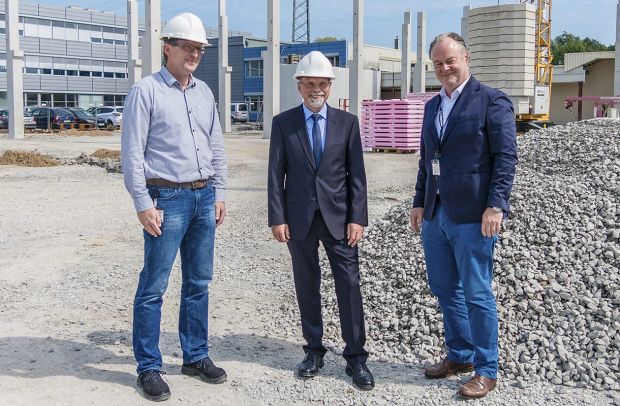 GERMANY, Enger. The production capacity of Multivac Marking & Inspection in Enger is to be expanded with a modern extension to the production hall – and this will also enable the logistics and assembly processes to be optimised.


The building work has already begun, and the planned date for putting the new production hall into operation is April 2018. The investment amounts to €2.5 mill.

The business development of the company is very positive: the number of machine orders increased by a total of 25% between 2014 and 2016, and last year the export share of the business was 77%. The growth is due to a rise in the sales figures for all types of machines, although the sectors of inspection systems and conveyor belt labellers showed the strongest growth. The core market continues to be the food industry, but the sector of healthcare and life sciences also registered a significant increase in turnover.

There is currently 197 staff in total employed at Enger. After the new building has been completed, the current operating area of around 5,800 m² will increase by about 1,600 m². Around 900 m² will be taken up by the new Assembly/Production and Logistics areas, while 300 m² will be made available for machining and welding. In addition to this, some 30 new office spaces will be created in an area of 370 m² on the top floor.

Multivac is investing in total around 2.5 million euros in the new production hall, which, with its reinforced concrete supporting structure and its flat roof made of trapezoidal steel sheets, is being constructed in accordance with the latest energy-saving regulations and renewable energy legislation. Due to the current building foundations, it is necessary to install 20 drill piles, each with a length of 15 m, under the existing building to prevent any subsidence of the new production hall.

The building work is due to be completed by the end of 2017. The internal work will follow in the winter, and completion is planned for the early part of 2018.