More flexibility rather than compulsory labelling 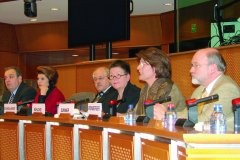 In the future, comprehensive product information will help to protect consumers and serve as the basis for them making informed purchasing decisions. "We cannot force consumers to live healthy lives. But by providing information and labelling we can help them to make better choices." This was how EU Health Commissioner Androulla Vassiliou explained the aim of the new legislation.

The Regulation will bring together the general food labelling requirements and the guidelines for nutritional values, hitherto contained in separate directives. Besides a requirement to provide obligatory information on nutritional values for pre-packed foods, the draft also includes compulsory disclosure of the products' region or country of origin and a declaration of the allergens. This also applies for loose goods.

Labelling must also be practicable for smaller businesses

IBC President Jean-Marie Oswald was less than pleased by these additional new requirements. Oswald, from Luxembourg, demanded: "A labelling law which is intended to be more efficient should serve to protect the consumer, but it should also be practicable to implement." There is little standardisation within the processed products, but there is a huge variety, he pointed out to the politicians. Recipes are based in some cases on the current availability of raw materials.

For European butchers and caterers it is crucial for the new labelling framework to be based on simple, flexible and largely non-compulsory rules. Butchers are already working hard to provide consumers with comprehensive information on what is in their products, said Oswald. Besides leaflets etc., this also includes providing information verbally over the counter.

Are politicians responsible for educating people into adopting a healthy lifestyle?

The EU Parliament rapporteur responsible for reworking the food labelling regulations supported the butchers in many points. Two days later Dr. Renate Sommer gave her statement on the draft Regulation. At the European Meat Forum she issued a harsh judgement on the EU Commission's plans. In particular she criticised the aim of putting extensive nutritional information on the front of a product. Sommer doubted whether it would improve consumers' habits if ever more information is included, turning the front of a package into the back. In shops, consumers are confronted with a whole range of different foods and labelling standards. Her fear is that they will be overwhelmed by the amount of information and will eventually refuse to read anything.

Similar to the Health Claims Regulation, Sommer argued in favour of removing loose goods from the extended nutritional labelling requirement. "It's the only way, I think." In this, she echoed the opinions of Jean-Marie Oswald. There are scarcely any standardised goods in the food industry. The recipes are frequently changed, and accurate analyses would be too expensive, given the large numbers of products involved. It would simply not be possible for small businesses to cover their costs.

At the same time the food industry is responsible for providing a wide variety and regional diversity of food, she said. She also believes, like Oswald, that providing customers with information can best be taken care of in the form of product leaflets and in over-the-counter conversations. What would be feasible, however, would be allergen labelling which she said should also be compulsory for non-prepacked foods. Up to now there has been no scientifically based research on what kinds of information consumers want and how they use the information. Such a study has just been launched, criticised Sommer. The present draft should therefore only serve as a basic set of rules which gives the different parties in the food production chain sufficient room for maneouvre.

Basil Mathioudakis, head of the Food Law unit within the EU Commission, calmed unease about the origin labelling for all types of meat. This would only be necessary if its absence were misleading, he said. The definition of the word "origin" represents a problem, however. Present practice is to state the place of the last major stage in the processing chain.

Variety of products at risk

IBC General Secretary Martin Fuchs warned against overweening regulation of the butchery industry: this would threaten the existence of a sector made up primarily of small businesses, and one which embodies the idea of a "Europe of regions".

"Think small first" is also the stipulation of the Small Business Act which aims to make life easier for small and medium-size businesses. Dr. Christian Weinberger of the EU Directorate General for Enterprise and Industry described the basic principles. However, Weinberger admitted that he was too late for the overhaul of the labelling law.


You can buy the rights to this article here.
Source: afz – allgemeine fleischer zeitung 47/2008