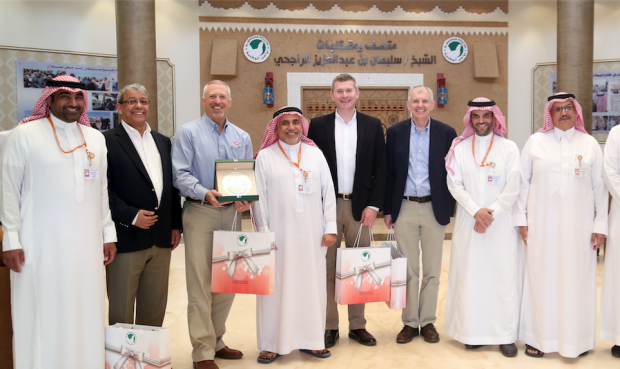 Al-Watania Poultry Company signed a distributor agreement with Cobb Europe for the territories of Saudi Arabia.

UNITED KINGDOM, Colchester, Essex. Al-Watania Poultry Company, one of the leading poultry producers in the Middle East, signed a distributor agreement with Cobb Europe for the territories of Saudi Arabia and a number of surrounding Gulf Cooperation Council (GCC) member countries. The company has worked closely with Cobb Europe for more than two decades in Saudi Arabia. Since acquiring the Cobb Egypt operations more than a decade ago, Al-Watania Poultry (Egypt) has been the Cobb distributor and a market leader in Egypt.


Currently the company processes more than 860,000 broilers per day. Further expansion will take the daily production to one-million broilers by 2020. This is aimed at supporting the Kingdom’s initiative to reduce dependency on chicken meat imports and increase by 20% local chicken meat production by 2020.


Al-Watania has plans to double output of parent stock chicks to four million birds a year by 2020, through expanding its hatchery and grandparent operations in Al Jouf. It is also investing in a fleet of transporters fitted with the latest on-board environment controls with each truck capable of holding up to 60,000 chicks for delivering to parent stock customers as far as 2,000 kilometres away.

Mohammad Hamed Al-Shayea, vice president of production for Al-Watania Poultry, said: “The Saudi government is seeking to increase food security and is supporting domestic poultry production to reduce imports which currently represent 55% to 60% of the market.”

Mark Sams, general manager, Cobb Europe, added: “The Middle East is a crucial region for Cobb, with enormous potential for growth as a key emerging market. This new distribution agreement allows us to enhance our services to customers in the Middle East, reducing transportation time and providing security of supply of parent stock chicks.”

The Al-Watania decision to further enhance its relationship with Cobb is influenced by the breed’s low cost of production of chicken meat. Al-Watania has benefited from the wide-ranging technical support teams that Cobb provides to advise on all aspects of production through its world-leading poultry experts. Currently, Al-Watania Poultry is seeing their best ever Cobb broiler performances.

Al-Watania Poultry has also taken the lead in training young Saudi aspirants in the field of poultry technology. This, too, is a joint program with Cobb Europe in training and developing the next generation of poultry professionals for the Kingdom’s poultry industry.