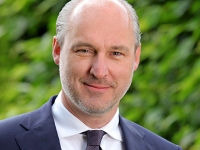 fleischwirtschaft.com — THE NETHERLANDS, Boxtel Michiel Herkemij has announced that he is leaving his position as CEO of meat producer Vion Food. According to a message of the company Herkemij and the Board of Directors at Vion Food have mutually agreed that after a number of drastic measures implemented under Herkemij, it is time for a change of leadership at the company.
Facebook
Twitter
Last year, the CEO already let it be known that he is not a "meat man". As an outsider, however, Herkemij managed to take a number of important decisions, including several major divestments. This turnaround has ensured greater financial stability at the company. In addition, Michiel Herkemij elaborated a number of strategic options. Now, in the view of the Board of Directors, it is time for a different style of leadership in order to further strengthen Vion Food.

Vion Food and Herkemij will be using the following period of time to ensure that the transition to a successor will run as smoothly as possible. The Board of Directors has appointed Director Tom Heidman as interim CEO. He is temporarily withdrawing from the Board of Directors until a new CEO is appointed.
Source: Vion Food