by Editor fleischwirtschaft.com
Monday, May 14, 2018 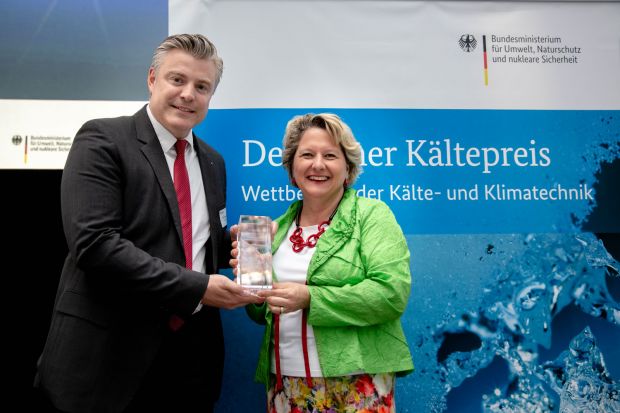 GERMANY, Mülheim an der Ruhr. The German Federal Ministry for the Environment, Nature Conservation, and Nuclear Safety has conducted the 6th German Cooling Award – and Menerga is among the winners.


Menerga’s carbon-neutral cooling technology – based on hybrid, evaporative cooling – has been awarded 1st prize in the award category “Energy-Efficient Cooling and Air-Handling Systems with Indirect Cooling”.

Within the context of its Climate-Protection Initiative, the German Federal Government has set the goal of achieving savings of ten percent of total energy consumption by the year 2020. This decision has provided the occasion by the German Federal Ministry for the Environment, Nature Conservation, and Nuclear Safety (BMUB) for inviting competitors to take part in the 6th German Cooling Award (German: “Deutscher Kältepreis 2018”).

Menerga took part in this competition for the coveted awards by submission of its AdiabaticzeroGWP carbon-neutral cooling technology, based on its proven Adconair heat recovery system – and Menerga succeeded in convincing the expert jury. The solution – which combines indirect, adiabatic evaporative cooling with dewpoint cooling in one air handling unit – was honored with 1st prize in the award category “Energy-Efficient Cooling and Air-Handling Systems with Indirect Cooling”.

This Menerga cooling technology completely eliminates a conventional compression refrigeration system and uses only water as a refrigerant. This technology allows not only positive consequences for the environmental balance of the system – since it produces no greenhouse gases – but also reduces power consumption of the fans by up to ten percent throughout the course of a year. This benefit results from elimination of the otherwise required cooling coils needed for refrigeration units or coolers in the air handling system.

This cooling technology employs indirect, adiabatic evaporative cooling in the first-half section of the heat exchanger. Outside air is therefore already extensively pre-cooled. In the second-half section of the heat exchanger, so-called dew point cooling takes place. For this purpose, part of the already pre-cooled outdoor air is withdrawn after its exit from the heat exchanger as process air flow. Then it is directed back to the heat exchanger in accordance with the counterflow principle and again humidified. In this way, repeated indirect evaporative cooling takes place. Unlike conventional systems, the lowest possible supply-air temperature is no longer dependent on the wet-bulb temperature of the extracted air, but rather on the wet-bulb temperature of the pre-cooled outside air. This solution enables effective extraction of heat loads from climate-controlled rooms, even in cases of great humidity loads.