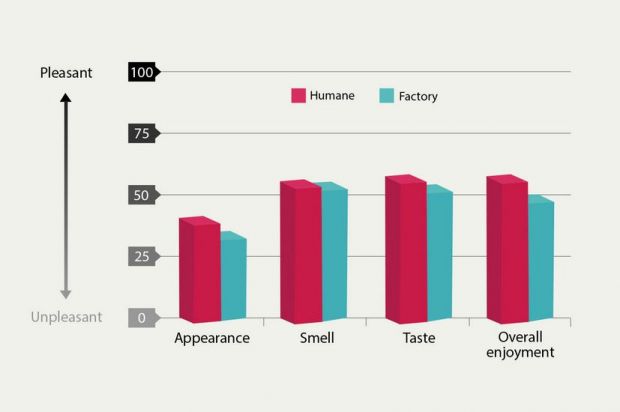 The first exper­i­ment showed that study par­tic­i­pants enjoyed beef jerky less when paired with the fac­tory farm descrip­tion com­pared to the humane farm description, even though the sam­ples were iden­tical.

USA, Boston, Massachusetts. Peoples’ beliefs about how farm animals are raised can shape their meat-eating experience, according to a new study led by Lisa Feldman Barrett, University Distinguished Professor of Psychology at Northeastern University.

The findings, published in the scientific journal PLoS ONE, align with an emerging body of research that shows that peoples’ beliefs can influence how they evaluate food. Wine, for instance, tastes better if they think it’s expensive – even if the fine vintage they’ve been told they’re drinking is really a cheap knock-​​off from a corner store.


“We show that what you feel very directly influences not only how you interpret what you see but also very literally what you see,” said Barrett, a pioneer in the psychology of emotion and the director of Northeastern’s Interdisciplinary Affective Science Laboratory. “We call this ‘affective realism’—the tendency of your feelings to influence the actual content of your perceptual experience.” The findings, she said, suggest that anyone interested in creating things, from a chef to a filmmaker to a designer, “should consider how beliefs influence the user experience.”

Barrett and Anderson hypothesized that believing meat came from animals that suffered would reduce the pleasantness of the eating experience as well as product consumption. The theory is based on a concept called grounded cognition, which defines beliefs as instances of conceptual knowledge that include affective and sensory neural representations. As the researchers noted in the paper, “beliefs that meat came from animals that suffered would be represented, in part, in regions of the brain that are associated with embodied simulation of animals’ experience.”

To test their hypothesis, the researchers designed three different experiments. For the first experiment, study participants were asked to consume two identical samples of organic beef jerky, each of which was paired with a different label describing a different kind of farm on which cows were raised. The “humane farm” label described a farm where animals lived freely, grazing outdoors. The “factory farm” label described a farm where animals were more like prisoners, confined to indoor pens.

The first experiment showed that study participants enjoyed beef jerky less when paired with the factory farm description compared to the humane farm description – even though the samples were identical.

The researchers found that study participants ranked the factory farmed meat sample as less pleasant along all measured consumption categories, including appear­ance, smell, taste, and overall enjoy­ment. Participants were willing to pay 22% less for a sixounce package of the factory farmed jerky compared to the humanely farmed jerky and consumed 8% less as well, showing, the researchers wrote, “that implicit consumption behavior was also influenced by beliefs.”

The second experiment was similar to the first, with a few key differences. This time, each study participant sampled only one of four identical roast beef samples, each of which was paired with a newly created description. To test whether the factory farm label reduced enjoyment or the humane farm label increased enjoyment, they added a control description that did not mention how the animals were raised. They also revised the original factory farm and humane farm descriptions to focus on their differences with respect to animal welfare and added a so ​​called factory farm+ description that highlighted the advantages of factory farming to test whether it would offset the effects of animal suffering.

“We were largely hypothesizing that labeling something as raised on a humane farm would improve taste and appearance and other characteristics of the meat sample,” Barrett said. “But what we found instead is that explicitly labeling something as factory farmed harms the perceptual qualities of the food.”

The third experiment tested whether beliefs about how animals are raised can influence basic sensory properties of flavor, including perceived saltiness and sweetness. For this experiment, study participants were asked to consume three identical slices of thickly cut deli ham. First, they tasted ham that was paired with no description – the control condition. Then, in random order, they sampled ham paired with the factory farm and humane farm descriptions, both of which were revised to include evocative text and pictures of the animals.

The researchers found that the descriptions influenced the flavor ratings of the ham sample. In particular, participants reported that factory farmed ham tasted saltier, greasier, and less fresh than humanely raised ham, reinforcing the study’s underlying premise that experience is shaped by beliefs. “Beliefs are really powerful. Words are really powerful,” Barrett said. “They influence what you do, often in surprising ways.”