Belgian Meat Office based on Eurostat 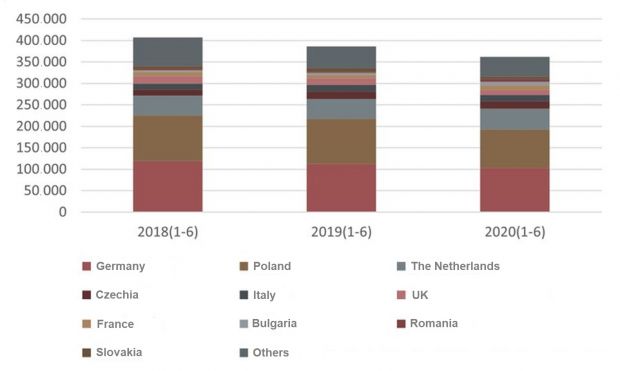 In HI-2020 the bulk of quantities of Belgian pork are sold in Germany.

BELGIUM, Brussels. Belgian pork production has remained almost stable in the first half of 2020. Exports, however, decreased due to COVID-19 and the consequences of African swine fever (ASF).

From January to June 2020, 5,313,460 pigs were put on the hook in Belgium, 39,550 animals or 0.7% less than in the same period last year. This is shown by the Eurostat figures. The commercially produced meat volume is estimated at 523,800 t, which is roughly the same as last year due to the higher carcass weights. Global pork exports declined by six percent to 362,067 t.

In business with third countries, 34,327 t were placed, down nine percent on the first six months of the previous year. Two years ago, ASF was detected for the first time in Belgian wild boar populations. This led to numerous trade restrictions outside the EU and added to Belgian exports. A spillover of the virus on domestic animal stocks has been successfully prevented to this day. The official status of ASF-free status is within reach and should soon clear the way for new sales opportunities.

From January to June 2020, fewer cattle were commercially slaughtered in Belgium, which caused a slight decline in meat production. COVID-19 has also left its mark on the export business.

In the first half of 2020, 380,000 cattle were sent to the slaughterhouse in the Kingdom. This is eight percent less than in the same period of the previous year. The amount of meat produced was 124,660 t or minus five percent. Worldwide 79,821 t of beef were exported, a minus of six percent compared to the first half of 2019.