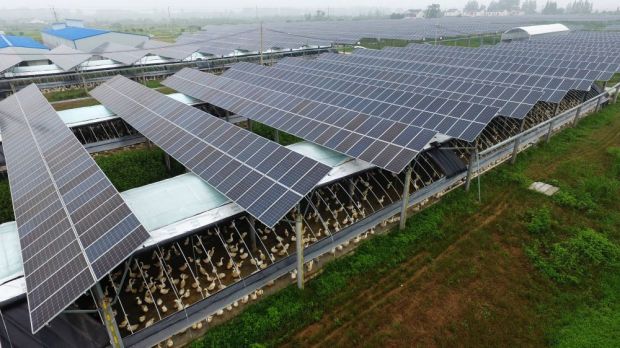 Photo: imago images / VCG
Large animal husbandry facilities, such as this farm for goose fattening in the eastern Chinese province of Jiangsu, should help to meet the growing demand.
Related Topics:

fleischwirtschaft.com — GERMANY, Bonn. China has become a "mega player" in the international agricultural market, so that changes in its production, consumption or trade volumes usually have a direct impact on global product prices. This market influence is likely to increase rather than decrease in the coming years up to 2029.
Facebook
Twitter

In many areas the demand for agricultural products and goods of the food industry in China is growing faster than domestic production. This will lead to rising imports. At any rate, this is the conclusion of the "Agricultural Outlook Report 2020 - 2029" recently published by the Beijing Ministry of Agriculture, which is considered the country's most important market forecast.

Security of supply has top priority

Even if such long-term forecasts are uncertain in times of trade disputes and corona, the report also gives an idea of the Chinese central government's agricultural goals. Security of supply for the 1.4 billion or so inhabitants is the top priority, which is why the modernisation of the agricultural and food economy is being actively pursued in many areas by the Communist Party. For example, large-scale industrial animal husbandry is being promoted and financial support is being provided for soya cultivation and the irrigation of arable fields.

This is no longer just about increasing production, but also about digitalisation, quality standards, food and biosecurity or environmental issues. Over the next ten years, a "transformation of agriculture" is expected to lead to "high-quality and green agricultural production" that not only meets the increasing demands of the growing urban middle class, but also meets international standards. In a system with market-oriented prices, misallocations are to be avoided. In addition, according to its own statements, the government wants to expand trade relations with other countries such as the USA, Brazil, the European Union, or the countries of the Silk Road. Despite increased efforts to expand its own agricultural production, the ten-year forecast shows that China's agricultural imports will increase in many product areas in the coming years.

First environmental regulations and then the losses caused by African swine fever (ASF) have caused the Chinese pig population to decline significantly in recent years. Although the stocks are slowly recovering, with large corporations in particular increasing their numbers and building new housing and slaughter capacities, the consequences of African swine fever will still be felt in the current year. China's pork production is forecast to fall by 3.2 mill. t or 7.5% compared to 2019, after falling by a good fifth a year earlier.

Although consumption is also expected to fall by 2.5 mill. t or almost 6% due to high prices and Covid-19, the supply shortfall would be greater. China's pork imports this year are expected to increase by around 700,000 t or one third compared to 2019 to reach a new record high of 2.8 mill. t. Thereafter, however, international exporters will have to adjust to lower sales opportunities in the country again as China's own production increases; by the end of the forecast period, the imports in question are expected to be only 1.23 mill. t. Chinese pork production is then expected to reach 59.7 mill. t and consumption to reach 60.8 mill. t.

According to the Outlook Report, the country's need for imports of beef is likely to continue to rise in the coming years, as consumption will grow somewhat faster than domestic production. According to the forecast, beef imports will amount to a good 2 mill. t in 2029, which is around 400,000 t or 23% higher than in 2019.

China is becoming increasingly self-sufficient in poultry meat. The scarce and expensive pork supply resulting from the ASF has recently led to a significant increase in the production and consumption of poultry meat; growth rates of more than 7% are expected for 2020. In the further course of the forecast period, however, growth is likely to slow down again, and by 2029, production and consumption of poultry meat could be almost on a par, at 25.9 mill. t each. The high import volumes of 800,000 t in 2019 and probably 860,000 t this year should then be a thing of the past; imports should then "only" reach about 590,000 t. By contrast, Chinese exports of poultry meat are expected to increase moderately to 550,000 t in 2029.