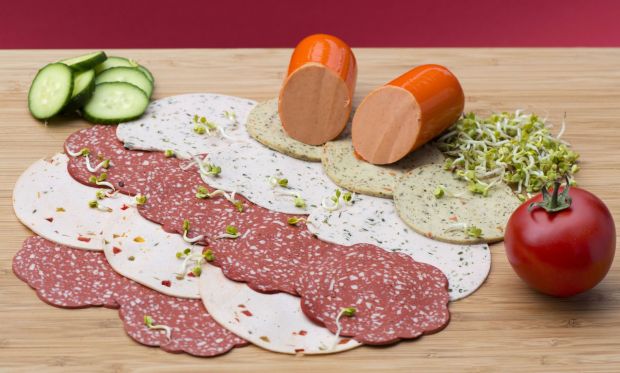 Photo: imago images / epd
Meat and sausage substitutes are the most popular, followed by spreads and milk substitutes.
fleischwirtschaft.com — GERMANY, Hamburg. A study by Splendid Research shows that consumers are not convinced of the price of meat replacement products. As long as they are more expensive than the cheapest conventionally produced meat, this will not change, according to the GDI.
Facebook
Twitter

According to the latest representative study by the Hamburg market research institute Splendid Research, 54% of flexitarians and 88% of vegetarians have already bought a vegetarian or vegan substitute product. Among the providers, Alnatura (68%) and Rügenwalder Mühle (67%) occupy the top positions in consumer awareness. Alpro, the specialist for vegan soy products, follows closely behind with brand awareness of 63%.

While 38% of vegetarians have already bought a Valess brand replacement product consisting mainly of milk, this only applies to just under 14% of flexitarians. Meanwhile, 57% of brand users recommend Oatly to others, which means that the oat drink manufacturer has achieved a top rating.

Beyond Meat too expensive

However, the brand image analysis also shows that consumers do not think that most manufacturers offer good value for money. This is particularly true for meat replacement suppliers Beyond Meat, which ranks last in this category. Oatly scores only marginally better, but achieves very good values for the parameters of authenticity and innovation.

In addition to the price structure, 17% of flexitarians and 28% of vegetarians criticize a lack of choice in replacement products. Besides for a scarcely third of the Flexitarier and nearly a fifth of the vegetarians the use of vegetable alternatives is connected with losses in taste.

"Straight one within the range of the vegetarians, who are more strongly dependent on spare products compared with Flexitariern, cannot satisfy the market the demand for more product selection. This offers chances for diversified product ranges", study chief Katharina Bauer is convinced.

Shopping in supermarkets and discounters

For more than 80% of flexitarians and vegetarians, taste plays an important role in their diet, as expected. Both consumer groups rate the price-performance ratio and their own health as equally relevant. The largest attitude difference reveals the animal well-being: While this aspect influences the nutrition for 83% of the vegetarians, this applies only to 53% of the Flexitarier.

"Awareness of sustainability and animal welfare will continue to sharpen and the proportion of flexitarians and vegetarians will steadily increase. Producers and manufacturers who have so far ignored this development should identify and make use of the market entry points that are still open," recommends Thilo Kampffmeyer, Head of Own Studies at Splendid Research.

As part of a representative survey, the market research institute Splendid Research surveyed 1,464 flexitarians and vegetarians between 16 and 69 years of age living in Germany online on the subject of nutrition in June 2020 via its online panel www.befragmich.de. The study surveys attitudes, general nutritional behavior and the use of substitute products. It also provides detailed insights into the market position of a total of 31 manufacturers of vegetarian and vegan (substitute) products, Splendid advertises.

Meanwhile, the German Gottlieb Duttweiler Institute (GDI) can imagine that no more animal products will be consumed in 2050. "Ultimately, a decisive question for the success of the vegan alternatives will be where the vegetable meat substitutes can be found in the supermarket (or on the menu in restaurants)," says the current report European Food Trends. "Will they be marketed as vegan products and hidden among almond milk, tofu, seitan and quorn? Or will they be prominently displayed alongside beef, chicken, lamb and pork at the meat counter?"

Another important criterion for the breakthrough is the price. "As long as vegetable spare products are still more expensive than the most favorable conventionally produced meat, vegane offers will hardly change the consumer behaviour. But as soon as there are vegetable proteins more cheaply than each meat at the supermarket counter, this innovation has the potential for the disruptive break-through.