Foreign trade has grown strongly since 1994 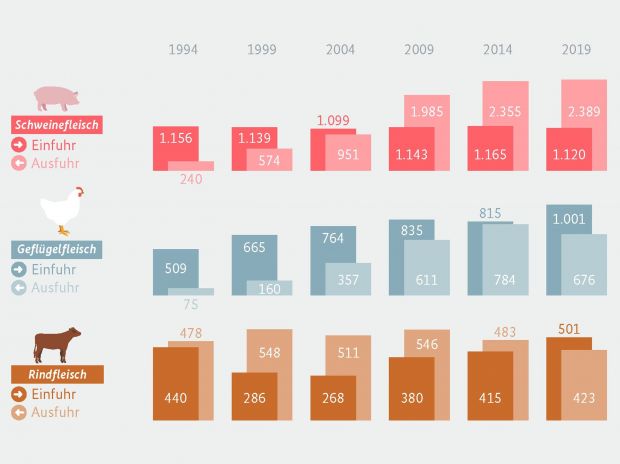 German imports and exports of meat have increased strongly over the past 25 years. Figures in 1,000 t slaughter weight.

GERMANY, Bonn. German imports and exports of meat have increased strongly over the past 25 years.

Last week, the German Federal Information Centre for Agriculture (BZL) pointed out that Germany has developed from an importing to an exporting country for pork during the period under review. While in 1994 only about 240,000 t of pork were sold to other states, a quarter of a century later the figure was about ten times as much at 2.39 mill. t. According to the BZL, however, the volume of imports has remained fairly constant over the years, most recently at 1.12 mill. t. The growth in exports is due to the increase in pork production, which was offset by initially stable consumption, which has fallen in recent years.

The development was similar in the case of poultry meat: here, German exports increased nine-fold from 75,000 t to 676,000 t, which was made possible by the almost 190% increase in production. In contrast to pork, however, domestic demand for poultry meat grew noticeably during the period under review, although the increase in demand could not be covered by higher production alone. According to the BZL, imports have therefore also increased and have almost doubled over the past 25 years from 509,000 t to just over one mill. t.

In the case of beef there have been the smallest changes in foreign trade compared with other types of meat. At 423,000 t in 2019, exports here were 11.5% below the quantity in 1994. This does not include live exports of cattle. Ten years ago, however, German beef exports amounted to 546,000 t, so that the decline has occurred in the last decade. The main reason for this was the declining livestock numbers.

Beef imports were subject to major fluctuations in the last quarter century. According to the BZL they amounted to 501,000 t last year, exceeding the 1994 level by 61,000 t or almost 14%. Over the past ten years, German beef production has declined while consumption has increased, making higher imports necessary.