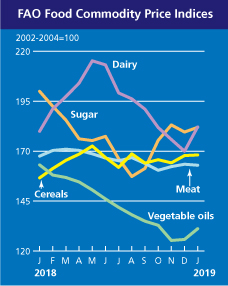 ITALY, Rome. The FAO Food Price Index is a measure of the monthly change in international prices of a basket of food commodities. It consists of the average of five commodity group price indices, weighted with the average export shares of each of the groups for 2002-2004.


The FAO Food Price Index (FFPI) averaged 164.8 points in January 2019, up almost 3 points (1.8%) from December 2018 but still 3.7 points (2.2%) below the corresponding month last year. After three successive months of relatively stable levels, the increase in January was largely driven by a sharp rebound in dairy price quotations as well as firmer prices of vegetable oils and sugar.


The FAO Meat Price Index averaged 162.9 points in January, almost unchanged from December 2018. In view of the non-availability of data from official sources in the United States because of the Government shutdown, the January value of the Index was calculated assuming stable prices for meat products in the United States. Elsewhere, international price quotations for bovine, pig and poultry meat remained steady. However, ovine meat prices declined by as much as 8.4% month-on-month, pressured by ample exportable supplies in Oceania.