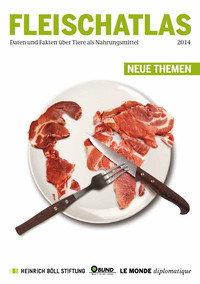 The Heinrich Böll Foundation, Le Monde Diplomatique and Friends of the Earth Europe / BUND launch the new Meat Atlas 2014, an analysis of the big business of the global meat trade.

The farmers of 2050 will have to produce an extra 150 million tonnes of meat to satisfy our global hunger. To reach a yearly total of 470 million tonnes, more land will need to be set aside to grow animal feed. In fact, farmers will be giving their animals 500 million tonnes of soy feed in 2050. Nearly double the amount they use per year today.

Barbara Unmüßig, President of the Heinrich Böll Foundation, criticises today’s highly industrialised meat production system: "Modern European and American abattoirs have grown out of all proportion. Here in Germany we kill 735 million animals per year. Whilst the US company, Tyson Foods, alone
slaughters more than 42 million animals a week.
This cannot be a healthy method of farming."

The real boom in demand is in Asia amongst the fast-growing middle classes. "Asia is quickly imitating the western model of highly industrialised meat production with the inevitable food scares, misuse of antibiotics, growth hormones and nitrogen pollution," says Barbara Unmüßig, President of the Heinrich Böll Foundation.

Keeping European troughs filled with soya already eats up 16 million hectares of land. "We’ll have soaring land and food prices as we grow more animal feed to produce a further 150 million tonnes of meat per year. It’s the poor who’ll pay the price of this global hunger for meat. They’ll be pushed off their land and will find it hard to afford food," says Unmüßig.

Meat treated with growth hormones may soon be entering the EU, as a result of the current trade talks between Europe and the US (Transatlantic Trade and Investment Partnership), the organisations warn. "Our high food and farming standards must not be undermined by this free trade deal," says BUND chairman, Hubert Weiger. In protest, BUND will hold a rally at Berlin’s "Green Week" on January 18th, calling for consumer and animal-friendly agricultural policies.

"Germany and Europe have banned growth hormones in animal feed for good reasons. The health risks for children and young people are far too great. If the free trade deal sways in favour of the multinationals and lifts the restrictions, it’s our health and the health of our animals at stake," says Weiger.
Source: Heinrich Böll Stiftung