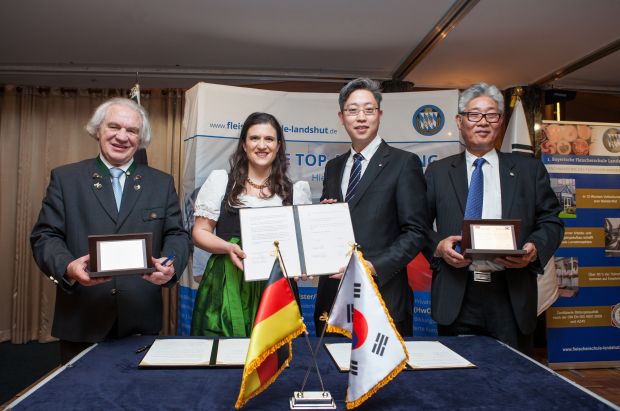 
The "1st Bavarian Butchery College Landshut" (1. BFS) is reinforcing its international orientation: in the South Korean capital Seoul it has signed a partnership agreement with Korea Metzgerei Corporation & Institute (KMCI) which runs butchers' shops to German standards and operates a private training college for butchers in Seoul. This may now call itself the "Seoul branch" of 1.BFS; students on the meat cutting or sausage production courses will be trained using the Landshut curricula and receive a special diploma. The German embassy is supporting the know-how transfer as a "model" venture.


The dual vocational training system is "the backbone of the German SME economy," said Economics Spokesman and Deputy Ambassador Weert Börner at the signing of the agreement. It helps ensure low youth unemployment levels and maximum quality standards for "Made-in-Germany" products. These are gaining in popularity in South Korea – and not just German cars and household appliances, but also sausage and schnitzel. At a reception held in the German embassy, Ambassador Stephan Auer urged the new partners to further intensify their cooperation.
More about this topic 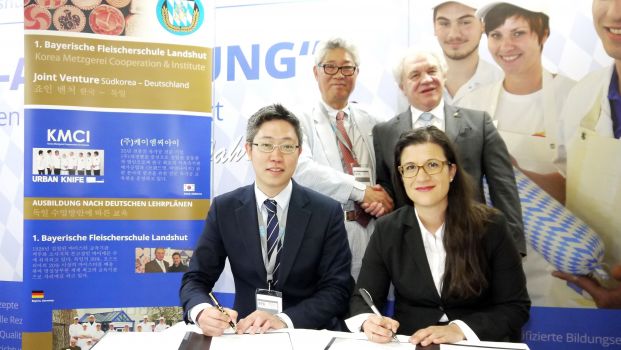 Horst Buchmann, buc
Landshut Butchery College
Exporting expertise to South Korea
Fleischerschule Landshut (Landshut Butchery College) has signed joint venture with teaching institution in Seoul - Also partnership with Japan over last 10 years. more ››
There are roughly 4,000 artisanal butchers' in South Korea at present. A law introduced in 2015 now allows meat and sausage to be sold in the same shop, which has stimulated the market – and the demand for qualified staff. Georg and Barbara Zinkl, respectively the managing partner and the head of 1.BFS, as well as the KMCI owner Ho Sik Yu and his son Dr. Byung-Kwan Yu, who heads the school in Seoul, see great prospects for the future.

The institute's facilities include a sausage teaching kitchen and a lecture theatre. There are currently four to five seminars per year with 20 participants each time. From autumn it is intending to offer courses which lead to a Korean Master Craftsman qualification. The training centre is certified, qualifying it for government subsidies of up to 50 per cent of the training costs. It is also supported by the South Korean Association of Butchers.

The Yu butchery family – which operates a sausage factory, a Korean and a German restaurant as well as two butcher's stores in major shopping malls (including a display kitchen for sausage-making) under the "Urban Knife" brand – is planning to invest over a million in the construction of a new head office and butchery college (with boarding facilities) outside Seoul over the next five years.