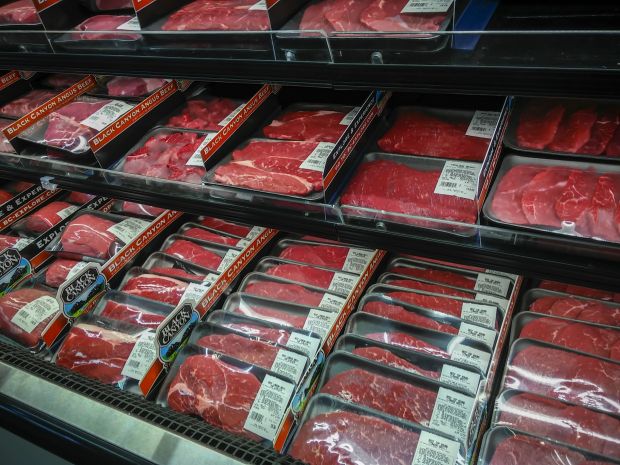 fleischwirtschaft.com — GERMANY, Frankfurt. Since the onset of coronavirus in the United States, grocery shopping patterns have been vastly different in terms of elevated spending, day of the week and day part, product and brand choices, and online engagement.
Facebook
Twitter
The week ending April 19 marked the seventh week of coronavirus-related shopping patterns. In-home consumption is here to stay for the foreseeable future and the additional demand continued to push retail sales well above prior year levels, despite going up against the later 2019 Easter, that fell on April 21. During these past seven weeks, the meat department has emerged as the sales leader of the fresh perimeter and the week of April 19 was no different. Despite the continued strong performance by the meat department, total perimeter sales were up just 1% due to the sales declines experienced in deli prepared, fresh bakery and seafood.

“The temporary closure of many meat and poultry plants in the past few weeks is only now showing up on the retail shelf, with many items becoming more difficult to find,” said Christine McCracken, Executive Director Food & Agribusiness for Rabobank. “U.S. beef and pork facilities are running at only 75% of normal levels, while chicken operations are operating 10% below the norm. This situation is expected to get a bit worse in the next two to three weeks, as additional plants are affected. Supplies of many processed and deli meats are also challenged as they compete for scarce raw materials and face similar labor issues.”

It is likely that consumers will continue to shift back and forth between proteins as they have in prior years when inflation or deflation affected the retail marketplace. The Food and Drug Administration also released new guidance to provide additional flexibility to the food supply chain, allowing restaurants and food manufacturers to sell excess product without labeled nutrition information directly to consumers in order to help ensure that available food is distributed throughout the country where there is need. Additionally, FDA announced it will work cooperatively with manufacturers for the remainder of the year on the implementation of the updated Nutrition Facts labeling with the understanding that it may take additional time to get products with updated labels into the marketplace.

“Pre-pandemic, foodservice/food retail was 50%/50% for beef and chicken, 70% retail/30% foodservice in pork – but this is only of the meat consumed domestically,” said McCracken. “This also varies by cut and item, with obviously more premium in foodservice. The issue is that much of the foodservice product is produced by foodservice-only providers that do not have retail relationships, packaging, equipment to convert the foodservice product to retail formats. In the case of chicken the bird size is completely different for foodservice – either much bigger or much smaller – the retail ‘tray pack’ bird sits right in the middle. This is why bird weights are shifting to accommodate the new demand.”

Significant differences are observed when comparing dollar protein shares between the first week of March, when sales were much in line with 2019 and the early part of 2020, and the week ending April 19. While shares are influenced by holidays and differ from week to week, pork and beef’s share continues to be elevated in both dollars and volume, whereas chicken’s share is down in both. The same look at volume shows the effect of pricing and the meat industry being out of balance at a macro level in terms of supply and demand. Year-to-date, turkey and exotic meats gained share, albeit off a much smaller base.

“Our top performing items, whether in retail or online, always include our wild game, particularly bison, venison and wild boar,” said Robby Sansom, Co-Founder and CEO of Force of Nature. “Our beef sells extremely well due to our premium look and higher values claims and the exotic proteins are tracking right alongside beef in performance. That was the case pre-COVID-19 and it certainly is now as people are trying new things and cooking more meals at home.”

Beef and poultry continue to increase

Beef and chicken, the two largest proteins, saw the largest increases in terms of dollars during the week of April 19 versus the comparable week in 2019. In absolute dollars, beef sold an additional $126 mill. despite going up against the 2019 Easter sales bump, with ground beef generating 62% of these additional dollars, or +$78 million. Chicken generated $62 mill. more during this third week of April versus the same week in 2019.

Next week's development is crucial

It has been less than eight week since many in the meat industry gathered in Nashville for the Annual Meat Conference, though it feels like a lifetime ago. As April draws to a close, there is still great uncertainty about the state-by-state decisions on “re-opening” the country. Some states began lifting their executive orders for non-essential businesses whereas others have indefinite shelter-in-place mandates. Only South Dakota remains free of statewide government restrictions that require businesses to close. The reopening of restaurants in some states may provide an indicator of consumers’ mental readiness and economic ability to re-engage with foodservice. For the foreseeable future, it is likely that grocery retailing will continue to capture an above-average share of the food dollar.

Next week’s sales results will reflect a regular week in both calendar years and may provide some indication of how far the new baseline will lie above the old normal. In addition to many consumption occasions having shifted to at-home, more than 26 million Americans have filed for unemployment in the last four weeks and economic pressure typically translates into more meal preparation at home.

Important changes this week include USDA Supplemental Nutrition Assistance Program (SNAP) program recipients will receive a temporary 40% increase in monthly benefits to provide relief from the pandemic-related economic slowdown. The boost lets families obtaining less than their maximum benefit get the greatest amount per their household size for as long as two months. Additionally, USDA approved Florida and Idaho’s requests to participate in SNAP Online. SNAP Online is now available in Alabama, Iowa, New York, Oregon, Washington, and Nebraska. California and Arizona’s requests to expedite the implementation of online purchasing were approved on April 2.