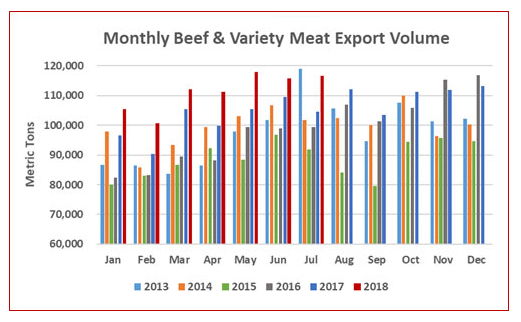 USA, Denver, Co. July exports of US pork and beef were higher than a year ago, according to data released by USDA and compiled by the US Meat Export Federation (USMEF). Export value results were mixed, with beef exports posting another near-record month while pork export value declined, reflecting the impact of retaliatory duties imposed by Mexico and China.

“As anticipated, the 20% duty in Mexico and 62% duty in China weigh heavily on the price these exports can command and on the returns generated for producers and for everyone in the supply chain. Buyers outside of Mexico and China have stepped up to purchase our product, but they are capitalizing on a buying opportunity made possible by the higher costs of doing business in Mexico and China,” said USMEF President and CEO Dan Halstrom.

The duty rate on most US pork entering Mexico increased from zero to 10% in early June and from 10 to 20% in early July. This took a toll on July exports to Mexico, especially in terms of value. July volume was 56,484 t, down just 4% from a year ago. But pork moved south at lower prices, with value falling 25% to $92 million.

Beef export growth to Korea continued at a remarkable pace in July, with volume up 51% from a year ago to 23,614 t and value soaring 66% to $169.2 mill. This shattered the previous monthly value record of $154.8 mill., set in June 2018. For January through July, exports to Korea jumped 38% to 136,897 t, valued at $971.2 mill. (up 54%). This included a 33% increase in chilled beef exports to 29,923 t, valued at $289.2 mill. (up 45%). US beef has accounted for 58% of Korea’s chilled beef imports this year and 53% of the chilled/frozen total (up from 54% and 47%, respectively, during the same period last year). Australia is expected to trigger its beef safeguard in the coming weeks, resulting in a temporary tariff rate increase agreed to in the Korea-Australia Free Trade Agreement. This could further strengthen momentum for US chilled beef to Korea through the end of this year.

US lamb exports continue to rebound from last year’s low totals as July volume jumped 104% from a year ago to 1,209 t and value increased 46% to $2.17 mill. Through July, lamb exports increased 54% in volume (6,680 t) and 21% in value ($13.44 mill.). While much of this growth is attributable to stronger lamb variety meat demand in Mexico, muscle cut exports trended higher to the Caribbean, the United Arab Emirates, the ASEAN region and Taiwan.