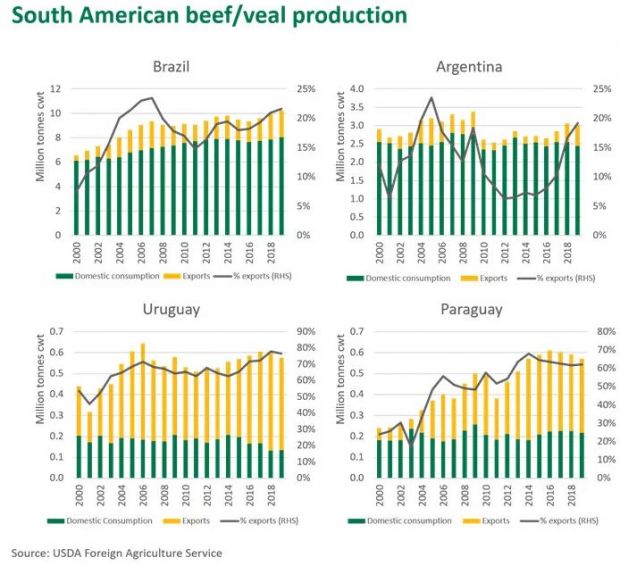 Considering the strong global demand for animal protein and the low value of the Argentine Peso and Brazilian Real relative to the US dollar, South American exports are expected to keep growing.

AUSTRALIA, North Sydney. South America continues to build momentum, with improving market access, growing herds and undervalued currency favouring exports. These conditions will continue to support beef export growth from South America off the back of a strong start to 2019.

China has clearly gained precedence, with the majority of exports pivoting away from Russia, the regions traditional partner. Year-to-July beef exports to China currently sit just under 500,000 t, up 37% on a year-ago and accounting for 35% of total exports from South America, where only 5 years ago this figure was 5%. Demand is expected to keep building heading into the Chinese New Year in January 2020 as African Swine Fever bites into protein supply. Considering the strong global demand for animal protein and the low value of the Argentine Peso and Brazilian Real relative to the US dollar, South American exports are expected to keep growing.

Brazil has recently had some big market access wins, last month reaching an agreement to supply Indonesia with 50,000 t over the next 12 months, and a beneficiary of the Mercosur-EU trade deal, negotiations of which concluded in June. However, the deal still needs to be ratified by both sides’ parliaments and, complicating things further, has recently received push back from Ireland regarding the clearing of Amazon rainforest for farmland.

For the year-to-July, Brazilian global beef exports have reached 810,000 t swt. Shipments to China were up 11% on 2018, which is relatively modest when compared to its Argentine (up 103%) and Uruguayan (up 35%) neighbours, who have had the bulk of their product snapped up by China. Meanwhile, Brazilian shipments to Hong Kong are down 10%, greatly affected by higher costs through the grey channel. Reports suggest Chinese interest in Brazilian beef is growing, and higher shipments are expected for August. This interest has been verified with the recent Chinese approval of 17 beef processing plants in Brazil for export.

Beef production throughout Brazil continues to increase, with investments leading to improved production efficiency, disease management, and supply chain traceability. Since the beginning of the millennium, Brazil has increased its beef production by 55%, or a staggering 3.7 mill. t. Much of these production gains can be attributed to the increase in the size of their national herd, growing by almost 17 mill. head over the course of 20 years.

The current economic situation in Argentina is delicate and fragile, with ongoing uncertainty regarding elections. After Mauricio Macrio lost the first round of elections earlier in August, the Argentine Peso has lost 25% of its value relative to the US dollar.  With high levels of inflation and the Argentine Peso at a historic low, Argentina is sitting at the brink of a financial crisis. The low value of the Peso will continue to make Argentina an attractive supply source for China, while higher levels of inflation will likely slow local beef consumption through 2019.

While Argentina has been granted access to the US, shipments there have been minimal due to the strong demand from China. There is a growing dependence on China, which has accounted for 73% of Argentine beef exports this year (195,000 t swt of a total 265,000 t swt).

High interest rates have made business conditions tricky for farmers, with the Argentine cattle herd potentially dropping 400 thousand head next year (cows represented 50.1% of slaughter for the first half of the year).

Uruguay has strongly positioned itself within the market for grass-fed beef, underpinned by strict sanitary standards and excellent transparency along their supply chain. Uruguay is targeting the China market by increasing branding and marketing initiatives, in particular through the southern regions. Current exports for the year-to-July sit at 195,000 t swt, with 68% of this heading to China.

For most of 2019 slaughter levels have been sitting above the five year average as high prices have encouraged liquidation. Lower cattle inventories and improving weather and feed conditions have slowed slaughter through winter, with August figures down 3,000 head on the same week last year.

2019 has been a challenging year for Paraguay, with flooding in March and May slowing sales, declining cattle prices and a fire at one of the largest meat packing plants reducing slaughter cattle demand. Year-to-July exports sit at 130,000 t swt, with the majority of this beef heading to Russia and other destinations around South America.  A projected increase in beef production and slow domestic consumption should lead to a revival of beef exports next year. Cattle slaughter picked up by 2% in August, which possibly indicates improved slaughter numbers for the second half of the year.