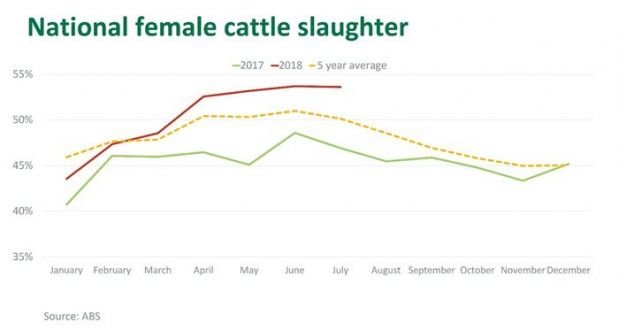 AUSTRALIA, Melbourne. Challenging conditions led to increased cattle, lamb and mutton slaughter in July, as well as a decline in carcase weights across the board.


Challenging dry conditions have defined 2018 for many producers across the eastern seaboard, with July being no exception. National cattle slaughter for the month totalled just over 712,000 head, bringing the year-to-date total to 4.5 mill. head, up 10% year-on-year.

Beef production in July totalled over 203,000 t carcase weight (cwt), bringing the year-to-date total to 1.3 million t cwt – up 8% on 2017 levels. While production increased, it was not to the same extent as slaughter, as the high proportion of females slaughtered saw average carcase weights decrease 4% year-on-year, to 286kg cwt for July.

National lamb slaughter in July increased 10% on year-ago levels, to 1.8 mill. head. This brought the year-to-date total to just over 13.8 mill. head. Lower lamb carcase weights in July somewhat offset the higher slaughter, as production increased 5% to just over 40,000 t cwt. For the year-to-July, the volume of lamb produced reached just over 317,000 t cwt, an 8% increase on 2017 levels and the highest for the first seven months of the year on record.

The difficult seasonal conditions have led to a pronounced increase in sheep slaughter this year, as producers continue to destock in the face of low feed availability. The year-to-date total almost reached 4.78 mill. head, up 27%, or just over 1 mill. head, year-on-year. In turn, mutton production also increased by 19% for the year-to-July (110,000 t cwt), although not to the same extent as slaughter, with lower carcase weights a result of the season. Average mutton carcase weight for July was 22.7kg – an 11% or 2.8kg drop from July 2017.